Hey guys, 2020 is far from over yet but I think it’s about time for us to check what 2021 had to offer for Chinese anime fans. While there are only limited donghua titles that have been announced for 2021 releases, it’s always better to take an early glimpse at it and add it to our watchlist next year. However, I will also update this post to add the newly announced donghua that will be coming in 2021.

Here, I’ll have a list of all the confirmed upcoming Chinese anime in 2021 as follows:

Note: Most of the Tencent anime lineup for 2021 had been revealed from their 2020 Tencent Video Animation Conference last August 8. bilibili also unveiled their donghua lineup for 2021 last Nov. 21, 2020.

Here I would like to share my thoughts about some of the 2021 Chinese anime releases that I am looking forward to watch.

Mo Dao Zu Shi Season 3. Also known as the Grandmaster of Demonic Cultivation or The Founder of Diabolism, the most spectacular and probably the best donghua to date is returning for its 3rdseason in 2021. All the flashbacks from the first and second season had concluded and now pave the way for all the donghua fans to follow the current timeline as Wei Wuxian and Lan Wangji continue to unveil the mysteries behind the demonic activities recently and how it was all connected to the previous demise of Wei Wuxian, as well as the truth behind Jin Zixuan and Jiang Yanli’s death.

While we don’t have a new trailer for Mo Dao Zu Shi Season 3 yet, a new poster has been unveiled last August 8 for the donghua during the 2020 Tencent Video Animation Annual Conference as shown above.

However, do you guys know that Mo Dao Zu Shi gets a Japanese dub version and it is slated for release on January 20, 2021? You might want to check it out as it aims to deliver our favorite donghua with a new shounen vibe. We also had plenty of big names as voice actors including Natsuki Hanae (Tanjirou from Demon Slayer), and Yuuki Kaji (Eren Yaejer from Attack on Titan).

The Three-Body Problem is an upcoming Chinese anime in 2021 and is based on the 2015 Hugo Award novel of the same title by author Cixin Liu. The upcoming series is one of the most hyped sci-fi donghua from bilibili’s lineup which was announced last November 2019. It is animated by YHKT Entertainment which also produced Ling Cage: Incarnation. There’s no specific release date for The Three-Body Problem yet but it is slated to get 16 episodes in total.

God of Spring & Autumn is one of iQIYI’s donghua adaptation in 2021 and is based on a comics of the same title.

The Snake: Become Human or Madame White Snake is an upcoming 2021 Chinese anime movie. As of now, there are only few details about available about it but it is not related to 2019’s movie White Snake: The Origin from Light Chaser Animation. Bai She Chuan movie is slated for release on February 21, 2021, and is directed by Jiazhu Yang.

On Your Mark is an upcoming action Chinese anime in 2021 from Pb Animation Co. Ltd. The story will revolve around the secret of a mysterious red gem.

This Chinese anime is supposed to premiere in the fall 2020 lineup, however, it was delayed due to some production issues and now confirmed for 2021 release.

Xingchen Bian: Xichen Yao Hai or Legend of Immortals Season 3 is the sequel of the recently concluded Stellar Transformations 2 from Tencent Video’s lineup last May 2020. It will follow the story of Qing Yu, the main protagonist in the series, and based off on the popular novel of the author I Eat Tomatoes who also wrote other famous source materials of Chinese anime such as Swallowed Star, and Snow Eagle Lord.

Quanzhi Fashi Season 5. Alright, here’s one of my earliest Chinese anime influences along with The King’s Avatar and it is returning for its 5th season as revealed in the Tencent Video Animation 2020 Conference last August 8. Tencent Penguin Pictures and China Literature are returning to produce it while Shanghai Foch Film Culture Investment will animate it. Full-Time Magister Season 5 will continue the story where the previous season left off last May 2020.

Battle Through The Heavens Season 4

Xiao Yan is returning for Battle Through The Heavens Season 4 or Dou Po Cangqiong 4 as announced in Tencent Video Animation 2020 Conference. The popular donghua concluded its 3rdseason last 2019 and fans are excited to see what will happen next and how our main protagonist will tame Queen Medusa as he returned to Jia Ma Empire. Shanghai Motion Magic is returning to animate the Battle Through The Heavens Season 4 which I am really glad since they made a good job with its previous season.

Hitori no Shita: The Outcast Season 4

One of 2020’s most hyped Chinese anime is Hitori no Shita: The Outcast Season 3 and we’re happy that after its stint last April and May, it will be returning soon with its 4thseason as unveiled from the 2020 Conference of Tencent Video Animation Event.

Tencent Penguin Pictures and Tencent Animation & Comics are returning to produce it, while I think Big Firebird Cultural Media will return to animate it after they had done a spectacular job with Hitori no Shita: The Outcast Season 3. Time Agents or Shi Guang Dai Li Ren is one of my most anticipated Chinese anime in 2021. It is animated by Haoliners Animation League, one of the most active studios in producing donghua nowadays. It follows the story of Cheng Xiao and Lu Guang who run the Time photo studio and they have the special ability to travel back in time through the pictures of their clients. Time Agents is an original anime produced by bilibili for 2021.

The Manual of Hundred Demons or also known as Bai Yao Pu is returning for its second season in 2021 after its dramatically emotional and successful stint from the spring 2020 Chinese anime lineup. It seems that we will have a deeper look at the backstories of Tao Yao, the spirit manual (fairy album), and the rest of the gang in Manual of Hundred Demons Season 2 as shown in the trailer which was unveiled by bilibili. Haoliners Animation League is returning to animate it.

Hei Men or Swarm is one of the sci-fi series in this list that I am looking forward to watch in 2021 from bilibili Chinese anime lineup. We are dealing with a universe within a human brain and this donghua will bring us to another exciting science-fiction adventure with a Chinese twist.

The Daily Life of the Immortal King Season 2

Wang Ling is returning in Xiang Wang De Ri Chang Sheng Huo or The Daily Life of the Immortal King Season 2. It’s about time to see how the story of our immortal king unfold as he tries his best to keep a low-profile life during his high school days. What would have been the consequences of his actions from the first season is a must-watch as we had seen how he tried to stop the time and create the world anew.

The Demonic King Who Chases His Wife Season 3

One of the most popular Chinese anime for female viewers, The Demonic King Who Chases His Wife or Xie Wang Zhui Qi is coming in 2021 for its 3rd season after it has been unveiled by iQIYI. The announcement was made even before the premiere of Xie Wang Zhui Qi Season 2 which is scheduled for release on December 11, 2020. 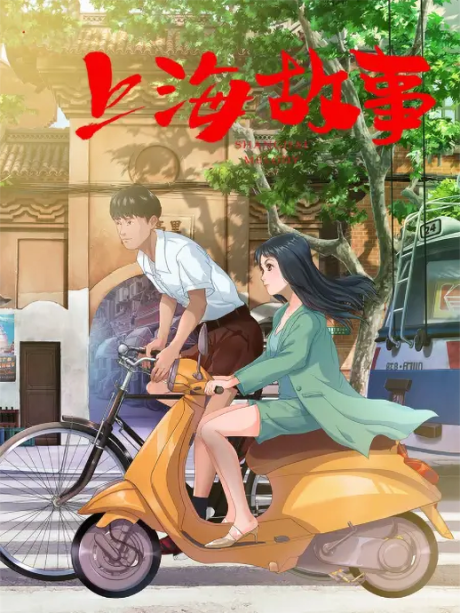 Also known as Shanghai Gu Shi, the trailer for this Chinese anime has been unveiled during the event of bilibili for their 2020-2021 donghua lineup. This is a promising donghua and reminded me of Comix Wave’s collaboration with Haoliners Animation League, the anime movie Flavors of Youth as well as the 2018 Chinese anime film Crystal Sky of Yesterday. The visual looks beautiful albeit the animation is a little bit rough. It seems that the story will be a dramatic and nostalgic story to follow for any anime fans out there. Here’s another boys-love donghua in this lineup and it’s Drowning Sorrows in Raging Fire or Lie Hou Jiao Chou. The trailer which was unveiled by bilibili looks beautiful with pretty character designs. As someone who loves Jie Yao (Antidote) boys love anime that aired this 2020, I am sincerely looking forward to see this donghua. Dinghai Fusheng Lu is a must-watch Chinese anime of 2021 for the fans of Tian Bao Fuyao Lu (Legend of Exorcism) as this donghua is a prequel to the popular boys-love series. While it is not animated by Sparkly Key, the animation looks pretty decent despite having some flaws. Nonetheless, it will provide some further background stories to several stuffs that we used to know from Tian Bao Fuyao Lu.

One of the most hilarious and funniest Chinese anime out there is coming back for its 3rd season, however, instead of bringing us some laughter, it seems that this stage of the story will give us a dramatic turn. Nonetheless, this is a donghua that martial-arts anime fans should definitely look forward to watch. 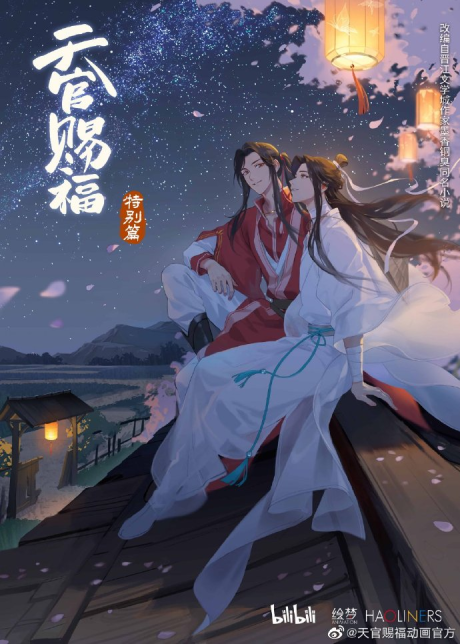 Tian Guan Ci Fu or Heaven Official’s Blessing is coming back for a special 1-episode on February 16, 2021. As bilibili’s biggest title under their belt this 2020 and one of the boys-love donghua trinity by author MXTX, this is a title in this list that fans will surely watch. 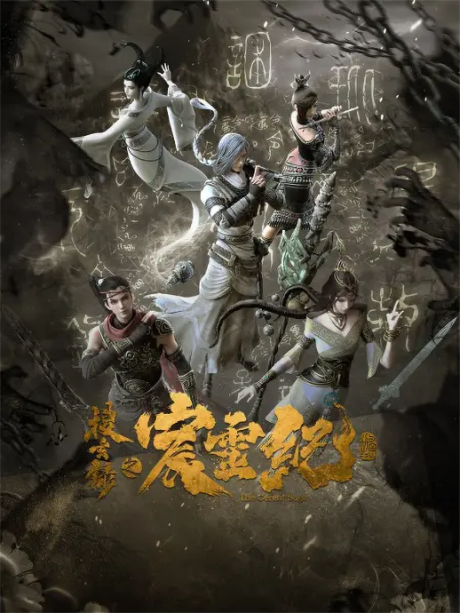 Sou Xuan Lu Zhi Chen Ling Ji is one of the well-received titles from bilibili’s 2021 Chinese anime lineup when they released its trailer during their event. This is an original series from studio Sjynexcus and a collaboration with Japan’s giant Bandai Namco. The Gerent Saga will follow the same antics similar to many Chinese 3D anime out there where fans can enjoy watching martial arts, imperial court conspiracy, revolution, and supernatural stuff. Also known as Qian Cong Shou is another project of Haoliners Animation League in this list. It looks like our typical shounen-anime where people had engraved labels in their bodies and this enables them to have special powers. This cliche actually reminded me of Plunderer, however, Overarching Guardian will follow their story in the academy and the journey of a certain student. From studio Tumble, Shadow Diver is a sequel to masterpieces Alita’s Trial, and A Bedtime Tale. This is one of the four Chinese anime movies under the belt of bilibili in 2021. Based on the available trailer, this donghua movie really looks spectacular and magical.

One of the best action donghua from 5 years ago is coming back and this time, Wawayu Animation studio is bringing us the 3rd season of Black and White Warriors. It’s been three years since its fans had seen its previous season and it’s just perfect to see how it will fare against the newly released action Chinese anime in recent years.

Yuan Long, the isekai/transmigration Chinese anime that we love from bilibili this 2020 is coming back for another season in 2021. While I am not a fan of this series, I am sure that many fans of the series are excited for its return after its successful stint during the summer 2020 Chinese anime lineup.

Li Lin Ke De Xiao Guan Er is a slice of life Chinese anime that I had on my radar for next year. It looks beautiful based on the available trailer and the plot itself really caught me even if it looks ordinary as it follows the life of a young man who runs a little restaurant just outside of the city.

Ban Shou Shao Nina is another Chinese anime from bilibilli 2021 lineup that looks like a generic shounen but keeps my hopes up high. Albeit, the title itself reminds me of the old school anime Steamboy.

Alright, so far there are the only upcoming Chinese anime in 2021. However, we will update this list as soon as we get new information about this thread. Nevertheless, I am sure that there is plenty of great donghua to watch out for next year as Chinese animation companies are now growing and put more effort into producing quality and appealing Chinese anime media.