You are here: Home / Chinese Anime / Swallowed Star Is A Must-Watch Sci-Fi Donghua from 2020

I had always been familiar with cultivation and martial arts donghua set in Ancient China, or in a fantasy world where magical beasts and immortals roam around; that is why Swallowed Star from Sparkly Key and Axis Studio had caught my attention upon the first time I gazed at it. It is a cultivation Chinese anime set in a futuristic cyber-punk alternate version of Earth where almost everything is handled by technology and the threat it faces is one caused by mutation. It took me several weeks after its premiere before I eventually started watching it. So, I binge-watch the first 5 episodes of the donghua and it got me captivated with its simplicity and generic story but well-executed animation, superb fighting scenes, and upbeat music. Therefore, I would like to give my initial thoughts about Swallowed Star or Tunshi Xingkong in this post – its source material, its story, and what makes it an interesting ride.

This Chinese anime is adapted from the novel Tunshi Xingkong or Swallowed Star written by I Eat Tomatoes who is known for xianxia or cultivation stories such as Stellar Transformations and Snow Eagle Lord. 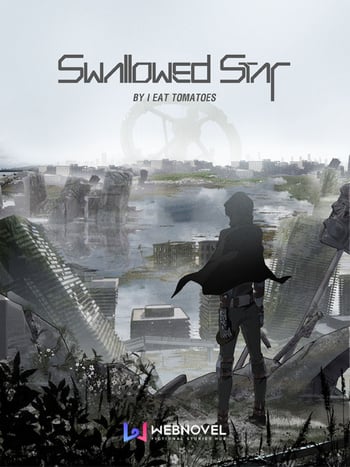 Year 2056, in a city in the Yuan Jiang Su Jin area. On top of a ruined, shattered six story residential apartment sits a teenager wearing a combat vest, militaristic trousers, and alloyed battle boots. On his back is a hexagonal shield and equipped is a blood-shadow battle knife. He sits there silently on the edge of the roof. At this time, the sparkling sky was shining and there was a refreshing breath within the air that blew towards him. However, there was only silence within the ruined, deserted city, with an occasional howl that makes your heart skip a beat. Source: Qidian

The series is a joint project of China’s Sparkly Key Animation Studio which gave us some of the most popular donghua of all time such as Soul Land, Wu Geng Ji, and the classic Qins Moon (The Legend of Qin); and with the British Axis Animation Studio. Upon watching the series, I could definitely tell that it’s a project produced by Sparkly Key based on its similarities to its prior works, especially with the animated fight sequence. One of the scenes where Luo Feng, the protagonist holding his sword simply looks like Wei Zhuang from the Nine Songs of the Moving Heavens and Legend of Qin.

Alright, here we go with my thoughts on it in general. Swallowed Star follows the typical plot and drama of any cultivation donghua out there. In the series, we have its main protagonist Luo Feng, a young lad who has great potential and aspires to be a warrior to save humanity from the threat of monsters and improve the state of living of his family. Being a warrior will allow him to give his family a luxurious life and also bring honor to himself.

A cultivation donghua won’t be complete without a thorn on his path and in this story, his classmate Zhang Haobai antagonizes him due to his potential as a warrior and as a threat for the affection of a female classmate named Xu Xin. I definitely don’t like this antagonist, he can gladly take all the hate from the fans because he deserves it. Meanwhile, the chemistry between Luo Feng and Xu Xin is quite genuine albeit it may seem like an average crush. Xu Xin in fact reminds me of a faithful female lead like Xiao Yu from Soul Land and Gao Yue from The Legend of Qin.

The donghua had a cultivation system that looks similar to Martial Universe where the main character can have the ability to use mental powers. While on the surface, Luo Feng pursues the path of a practitioner to become a full-fledged warrior and there are a level and stages that he needs to achieve to do that. Now, that looks like any other cultivation system from various donghua with the main character gifted with a rare and innate ability which makes him special than his peers.

There’s something that really made me think of Swallowed Star as a unique cultivation donghua. In other series, the main character must go on an adventure and defeat magical beasts to get their soul stones or similar stuff or look for mantras and scrolls to increase their power. Such is not the case with Swallowed Star, there’s an established system in the story where characters can simply purchase what they want. Therefore, it all comes down to how much money Luo Feng had in his pocket. Now, even the viewers might sigh how expensive and flashy almost everything in this series. This actually reminds me of a certain Chinese web novel that I have read online where almost everything is expensive af.

Where to Watch Swallowed Star?

Currently, Swallowed Star is airing in China and it can be watched on Tencent Video and its affiliated platforms as follows:

Although, I have seen various subbing groups doing fansub of the series for the global audience such as Narul Donghua, Izfanmade, and Kurina Official.

Now, if you guys haven’t watch Swallowed Star yet, I am urging you to give it a try. It is not the best but if you’re simply looking for another good title to be added to your plan-to-watch list of Chinese anime, then this is one is among the better options for you.