You are here: Home / Entertainment / Must Watch Anime on Netflix to Binge Right Now in 2020

Netflix has gone all-in with its investment into international and foreign TV and movies — especially when it comes to anime. Besides purchasing the rights to classics, they’ve also funded tons of new anime creations that hit the platform nearly weekly. Unfortunately, with so much to choose from, even lifelong anime fans may have trouble figuring out where to get started. Explore this handy list of the top anime on Netflix this year.

Must Watch Anime on Netflix in 2020 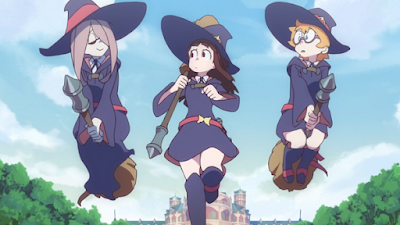 A series about an endearing witch who strives to be the best student at her witch academy, this is a great watch for anyone who enjoys witch media. Centered on Akko, a girl from a non-magical background, this show really puts out some Harry Potter and Hocus Pocus vibes. Akko isn’t naturally talented and must work really hard to practice her spells, resulting in hilarious shenanigans, but she never gives up. Her indomitable spirit is quickly turning her into a much-beloved protagonist in this original show.

In a show where clothing gives you superpowers, this older anime from 2013 follows transfer student Ryuko Matoi who is searching for her father’s killer. She wields a scissor shaped longsword instead of the more traditional samurai sword and often clashes with other classmates in this heroine driven storyline. If you loved the animation of the fight sequences of Spider-Man: Into the Spider-Verse and the premise and characters of Alita: Battle Angel, this anime was made for you.

A classic and a must-see story from 2009, Full-Metal Alchemist: Brotherhood is the second anime adaptation of a manga by the same name. Two brothers, raised by their mother, find themselves moving up the ranks of a fascist government. Searching for a magical stone to help them restore their bodies, they are quickly caught up in the intrigue of another sinister group searching for the same thing. The show explores morality, ethics, xenophobia, state violence, and so much more — leading many to call it their favorite and decorating their homes with anime figurines from the show. Get caught up in this action-packed drama with Edward and Alphonse Elric.

Set after a violent and bloody war that used child soldiers, one of those soldiers must now re-adjust to life in peace-time. The original show from 2017 gained such popularity that it won Best Animation at the 2019 Crunchyroll Anime Awards. Because of its brilliant success, several spin-offs, including a movie released in 2020, have made their way to Netflix along with the original. Watch all of them for a comprehensive look into Violet’s transformative journey.

A massive anthology that includes over 700 episodes, Naruto and Naruto: Shippuden have spawned a huge following. There’s a reason fans want to surround themselves with everything Naruto, from air fresheners to stickers! One of the most beloved anime from the last 20 years, you can follow along with Naruto and his ninja friends as their characters grow and develop throughout a story that includes everything from taking out enemies to taking on odd jobs.

Hysterical and thoroughly action-packed, One Punch Man follows Saitama, a hero undergoing a quarter-life crisis. Because he can beat any enemy in one punch, he constantly trounces his opponents, leaving him wayward and unfulfilled. If you loved Ip Man and Thor: Ragnarok, this anime perfectly combines their humor and earth-shattering fight scenes into one unique anime. This series even inspired a game nominated in The Game Awards 2020 event.

As one of the most viewed Netflix Originalsin countries across the world, Castlevania definitely deserves a spot on this list. Originally based on a video game of the same name, this series has had a number of rebirths until its Netflix debut in 2017. The second season was released in 2018 and a third season has just hit your silver screen (read: laptop screen) in 2020. If you have nothing to do while stuck in quarantine, binge-watching a vampire-themed saga should keep you busy.

This list should get you started on your anime journey! Are there any Netflix animes that you would add? From One Piece to Attack on Titan, don’t hesitate to share your favorites in the comments!