You are here: Home / Movies / My Hero Academia: Heroes Rising Movie Review – Teamwork’s Impact & What it Means to be a Hero…

Once again, My Hero Academia has proven that it is the king of the new era of shounen anime genre. From the first time it glimpse the anime community in 2015, My Hero Academia had gained a cult following and has been consistent in delivering great narration and amazing character development despite how generic its story might be. At the end of the day, it is an inspiring anime that awakened the inner kid inside of us and has been revolutionary in its own way in impacting the new generation of shounen anime viewers.

My Hero Academia: Heroes Rising is the second movie from the franchise with director Kenji Nagasaki helming the project. It was animated by studio Bones and was released in Japan last December 20, 2019 and later got its release outside of Japan the next year.

In this post, I would like to share my thoughts on the movie which gave me chills and an emotional maelstrom. My Hero Academia anime series means a whole lot to me and I even listed its 3rd season as my best anime of 2018.

Deku and the rest of the heroes of Class 1-A must save a group of islanders from a powerful villain.

The story is set in Nabu Island as the Class 1-A heroes are working as an interim agency until a new hero will be assign there after the previous hero retired. There, we had seen the group runs their plucky hero agency with so much enthusiasm. 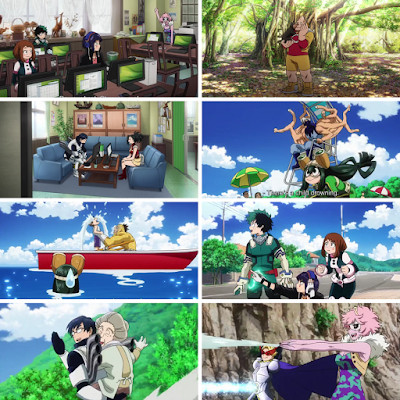 Everything is going alright until a powerful villain arrives and threatens the islanders as they seek for a certain quirk within the island. This is where Class 1-A must stand their ground as the hero agency in-charge of Nabu Island no matter how powerful is the insurmountable enemy is in front of them.

In the surface, the premise of the story looks generic like any other superhero story that we had out there. However, what sets My Hero Academia: Heroes Risingapart from them is the great narration and character development that we had witnessed from it. We had seen the transition of these young heroes from dreamers into real saviors who will risk their own lives for the sake of people they promised to protect.

The movie also thrive in the fact that it revolved around the Class 1-A students, thus we see each of them given the time to shine and their interactions are just priceless. Each of them are involved and the story simply does not rotate of Midoriya or Bakugo alone, albeit they both played a magnificent role at the movie’s climax. In fact, My Heroes Academia: Heroes Rising movie had made me love Bakugo even more, he became the hero that you’ll be proud to save you.

If there’s anything that I could complain is obviously at the climax part. I felt like I shared the same sentiments with other viewers out there but personally, the climax went overboard. When Deku transferred the One for All to Bakugo, it really got me emotionally. I love that the movie was able to hit all my senses emotionally but there’s quite the lacklustre in the story’s climax that left me a bit empty until its denouement. The animation though was quite exaggerated for me and I felt bad that weren’t able to see a little depth on the Nine (the antagonist) character.

The animation and art for the movie is just like any other instalment of My Hero Academia franchise. I love the consistency that the production team exerted here and what’s even more amazing is that we had an eye-catching and delightful climax although I felt like it went beyond and got exaggerated. Nonetheless, those were top-notch animation we got there and My Hero Academia once again proved itself that it could packed a punch of good story and fantastic animation.

The art style are as beautiful as usual and simply gives off the typical My Hero Academia vibes.

As the story is set in the Nabu Island, Class 1-A had their hero agency there doing various jobs to help the islanders with their daily lives. It’s quite refreshing to see the students relax a bit and had fun while doing their duties. Yes, it may seem laid-back at the beginning but things didn’t last that long as it gets more serious later on with every one of them putting their lives on the line for the sake of their duty as a hero.

My Hero Academia: Heroes Rising has been a journey where every member of Class 1-A risk their lives to fulfill their duty as a hero. We had seen them show off their quirks on helping the islanders and until the moment where they have to fight the enemies. The group had an amazing teamwork this time and it has been showcase extensively during the pre-climax scenes where they have to stop the enemies’ advances.

Among my personal favorites from the films includes Uraraka, Mineta, Sero, Aoyama, and Yaoyorozu’s team up. That was probably one of their best moments throughout the anime series. Ashido and Tokoyami duo also did a great job. While Iida, Todoroki, Asui, and Kirishima truly did gave us a splendid fight there despite how powerful their opponent is. Ojiro’, Shoji and Jirou also did their heroic best while the rest of the gang are keeping the islanders safe, reassuring them that everything shall be alright.

That is how a teamwork should be done, while Midoriya and Bakugo awesome teamworkdid have the spotlight in the story and we are not complaining about that. It’s amazing to see that almost everyone from the group were given the chance to showcase what they can do. Thus, reminding us of the title Heroes Rising, yes those heroes includes everyone in the group and does not only involve the main characters of the anime. 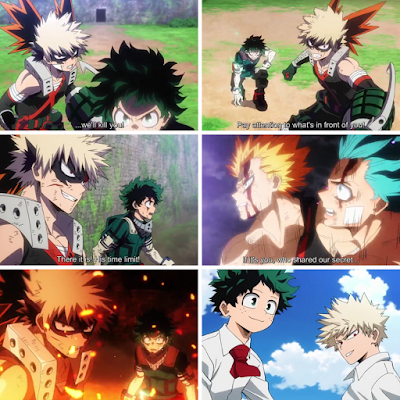 Bakugo has shown a more heroic side of him, and we’re actually falling for him even more. Personally, I was really disgusted with Bakugo when I first watch the anime and I am happy that I was able to change the opinion of him as the story progress and even see his character develop into someone that we can adore. Bakugo’s character in the film is a delight to all his fans, and obviously had him gain some more.

Midoriya somehow had shown us that there’s more to being a hero and that includes the willingness to sacrifice your dreams for the sake of your duty as a hero. Here, we had seen him readily surrendering One for All in order to help Bakugo defeat Nine, and that’s just an emotional moment that I had struggle to watch. I think it has both the pros and cons that actually drag the series down including what had happened afterwards.

In the end, Midoriya had shown us that he’s more than just our ideal hero, there’s more to his character that we can all relate ourselves with. He’s another hero that reflects who we are inside, while he’s too idealistic, that is enough reason for us to get inspired. Yes, Midoriya’s character had been an inspiration to us. Personally, I am really happy that My Hero Academia’s not just our typical action-packed anime, instead it’s a story that could motivate its viewers, and affect our outlook in life in one way or another.

The movie also did a good job with the newly introduced characters that played a vital role in the story’s progress – that’s Mahoro and Katsuma. The two kids in the Nabu Island whom they met. Katsuma is also the target of Nine’s group due to his special quirk that could permanently relieve Nine of his illness. While Mahoro is doing her best to protect her younger brother in the absence of their parents. Together, Mahoro and Katsuma became the central point where the story revolved and I just couldn’t help but love them both.

For the antagonist, the League of Villains are still present although they played a minimal role in the movie, they actually perpetrated the action of Nine’s group. Albeit, the major villains in the movie is Nine with his omnipotent powers. Unfortunately, there’s a loose end to that power and just like any other overwhelming characters from other anime series, Nine’s weakness is his illness, which actually reminded me of Uchiha Itachi. While Nine’s character sure lacks some depth, or it seems that we didn’t get to see more of his motives, and what’s his driving force to do evils, I guess we can settle with how things ended up in the movie.

We did have an amazing set of music and sound editing in the movies. However, what really amazed me is the voice acting which gives some more life to the characters than they usually are. I felt like were having some more vibrant colors than usual in the voice acting of the characters, or maybe it’s because I felt like this is the moment where they had been push to their limit so far. I could feel the drama, I could feel the fun, it’s inspiring, and quite heart-breaking, I was able to have all the emotions that the story intended to bring forth and a huge factor to that is the amazing voice acting that each characters had.

In the end, I could say that I had been utterly satisfied by My Hero Academia: Heroes Rising anime movie and it has been one of the best that I had seen in recent years. While it is nothing spectacular and ground-breaking that could affect the entirety of the series, its impact sure is something that can’t be deny especially for its avid viewers who had been following and rooting for the young heroes all these years. It was even an amazing movie that could convince the general anime community to engage themselves with the series and start watching My Hero Academia.

Thus, we can conclude that putting your life on the line to save the people you promised to protect, inspires them, and selfless sacrifices are only few yet important factors of what it means to be a hero. And U.A. Class 1-A seriously did have those qualities, assuring us that the future heroes had already risen.

You may also check some more reviews about the movie in the following sites:

This is where I shall end my review of My Hero Academia movie 2: Heroes Rising. If you wish to read some more anime movies reviews from us, you may check the following post:

•  Weathering With You Anime Movie Review