You are here: Home / Recommendations / List of 10 Anime to Watch on Valentines Day The season that gave us butterflies in our stomach is here once again and for the anime community, it’s another chance to spend the day watching romantic anime. However, for a couple who loves anime, we have prepared a list of anime that you’ll want to enjoy watching with your partner on Valentine’s Day. May it be watching after a romantic dinner date, or simply spending the whole day together at home watching your favorite anime that will give the feel of love is truly in the air – these anime titles will surely make you fall in love over and over again.
Meanwhile, I also suggest this anime for people who are single (just like me) because I think fictions are even more fantastic than reality. So, I am sure that on my end, I will seriously enjoy watching these anime and feel Valentine’s fever than actually going on a date. Furthermore, Valentine’s Day is another opportunity for me to go full-time introvert with these anime on my watchlist. Alright, let’s start our list of romantic anime worth watching with your special one or your friends during the month of love.

Ao Haru Ride. It’s the love train that brought me in tears several years ago. Futaba and Kou definitely gave me so many lovebugs that time and the memories still lingers and embedded into my memories until now. A hilarious rom-com school anime that tackles family issues, friendship, and trust – that is what AoHaru Ride at first glance. Once you delve deeper, you’ll easily recognize that it’s a story of a girl who’s doing her best to reignite the flame of an old faded first love. Our best girl Futaba had broken her way into the heart of our Kou who became hard and cold due to certain circumstances that changed his outlook in life. The anime is a dramatic story of our heroine saving her special one from the cursed that he put on himself and bring him back to life while also delivering the hilarious note and normal high school vibes in the air throughout its 12-episode stint.

Snow White with the Red Hair

Akagami no Shirayuki-hime. We have here one of the most sophisticated romance anime series that I have seen so far. It’s a charming story of a runaway young lady named Shirayuki and the carefree yet responsible Zen – 2ndprince of the Kingdom of Wistalia. What’s great about their story is that we have a strong-willed heroine who’s way ahead of her time and obviously not your typical damsel in distress from any of the classic fairy tale stories. Our red-haired lady Shirayuki proved herself over and over again and she had what it takes to stand beside Prince Zen despite all odds. Joining their romantic love story is Obi, Mitsuhide, and Kiki, who will support our love birds in every single way they can. In my own honest opinion, Snow White with the Red Hair is among the most perfect fairytale-like romance anime story that will make our hearts beat faster than usual with its pretty generic yet effective cliché.

Say I Love You

Suki-tte Ii na yo. I have said this before and I will say it again, Say I Love You is among cheesiest romance anime series of all time. We have a young aloof girl that needs protection but acting tough on her own because she believes that being distant from other people keeps yourself from harm. Her life will change when her tough surface will collide with the campus heartthrob who got interested in her. In this complicated high school romance drama anime, Say I Love You had shown us a story of young people with scars in their hearts and melancholic past that they want to escape from or forget. That’s what makes Say I Love You an interesting anime as aside from giving us so many butterflies in our stomach; it could also call forth all the feels out there. Nonetheless, there are plenty of life lessons that Say I Love You had in-store in its plot, which I believe is genuinely relevant to teenagers nowadays. For romantic value, I have this anime a rate of 10/10 on my own personal list. 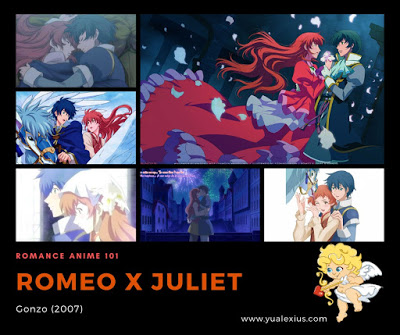 An anime adaptation which I believed is even more amazing than the original Shakespearean play of the same title, Romeo x Juliet covers a lot of relevant issues despite being set in a fictional world. Just like the tragic story from the original Romeo and Juliet play, there’s a lot of moments from this Studio Gonzo classic that will make you cry and emotionally unstable. However, this anime simply reflect the saying LOVE CONQUERS ALL, as the journey of our main protagonists was both a romantic and bitter adventure filled with drama, betrayal, thorns, and actions. If you and you’re partner loves such naive yet heartfelt drama for Valentine’s Day, then Romeo x Juliet is definitely for both of you.

Karakai Jouzu no Takagi-san. If you want things to be light and simply relaxing, Skilled Teaser Takagi-san is the perfect anime to watch on Valentines Day. It will make you feel happy and amused by how awesome our main heroine is. I personally believed that Takagi-san one of the most amazing and adorable anime heroines out there. The way she teased Nishikata and defeats him in his own game is just purely perfect and insane. With such charm and light-hearted narration, Skilled Teaser Takagi-san could be a perfect post-dinner anime to enjoy any couple out there this love month.

As the Moon, so Beautiful 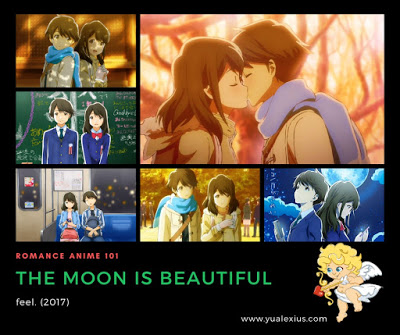 Tsuki ga Kirei. Definitely anime with pure romance on which anyone can relate with and that is what TsukigaKirei is all about. It’s an anime that will make you fall in love even in the most simple and ordinary plot, no heavy plot twists but just two people falling in love with each other. It’s a realistic story of navigating love and romance with a sensationalized touch.

Kimi no Na wa. An anime love story like no other, despite several plot holes, Your Name had been an enduring one capturing hearts of so many people from all over the world. A masterpiece from Makoto Shinkai, Your Name. has so many to offer aside from its exciting and fun romantic time-defying love story. It’s the biggest anime blockbuster of 2016 breaking so many box office records with its dazzling storytelling, and visually stunning animation. Paired with an amazing soundtrack, Your Name is undeniably a must-watch anime for lovers.

Whisper of the Heart 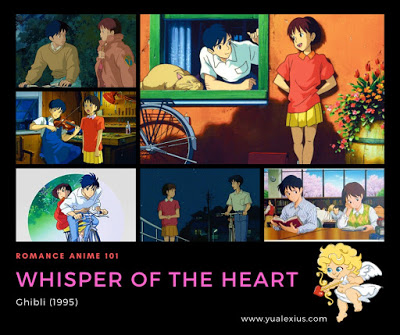 Mimi o Sumaseba. Here we have my favorite Ghibli films of all time which also happens to be one of the best romance anime that I have ever seen. A funny and amazing story of budding love between two young hearts which both inspire and support each other in reaching their dreams in life and that is the main theme of Whisper of the Heart. The light humor always makes it hilarious and warm while the teenage drama of youthful romance further gives colors to its wonderful plot.

Kimi ni Todoke: From Me to You

Kimi ni Todoke is a romantic slice of life school drama anime which is quite similar to Say I Love You in some aspect. However, it also stands out in its own way as a unique coming of age story despite having so many generic clichés. In the end, it’s a romantic anime which will give you the love bug about two young hearts who became close and find solace in each other despite their differences.

Tonari no Kaibutsu-kun – a pretty generic school romance story but having exciting and interesting main characters which will keep us in our seat until the series is over. My Little Monster is an anime that few couples might relate themselves with and give them some thoughts to reflect on themselves. It tells the journey of discovering and exploring different emotions for the first time and how the main characters will handle their feelings towards each other is a nice twist in this series.
And that ends our recommended anime to watch this Valentine’s Day. Although I also have here some more recommendations as part of our honorable mentions for this topic as follows:
Then, let me ask you guys, how many of these shows have you watch already? Are there any other romance anime that you would like to add to our list? I will highly appreciate any feedback you guys have. Now, whether you’re taken or single, as long as you’re part of the anime community, it is undeniable that the best way to spend Valentine’s Day every year is to watch our favorite anime which invokes the love bug out there. To end this post, I would like to greet everyone a happy Valentine’s and may everyone have a great moment celebrating it with their loved ones or with the whole family.