You are here: Home / Anime / Top 10 Anime Like Somali and the Forest Spirit Hey guys, it’s Yu here from Yu Alexius Anime Portal. I am back for another delightful talk about Somali and the Forest Spirit, an ongoing anime series airing as part of the winter 2020 anime lineup. I must say that it is currently one of my personal favorites and among the most exciting and heartwarming anime that we had for the season. Somali and the Forest Spirit tells the story of a young orphan Somali who got lost in the forest and was found by a golem who later took her and raised her like his own child despite knowing nothing about humans. The story is set in a utopian world filled with supernatural creatures where humans almost went extinct. Yes, it actually sounds apocalyptic for humans but the world-setting of the anime so far is almost beyond perfection.
Somali and the Forest Spirit thrive in the vivid graphics and beautiful animation sequence which I believed further gave a vibrant ambiance to the anime’s story. While it was still early for the winter 2020 anime lineup and the anime is currently in its 3rd week, I would like to share some recommendations about similar anime to Somali and the Forest Spirit which will make us crave a relaxing experience with heartfelt drama, gorgeous visuals, and relatable characters. As of now, my first impression of Somali and the Forest Spirit is that of a relaxing mild adventure that showcases the journey of Somali and the Golem while also embracing the possibility that one day they’ll be separated from each other. It’s gonna be an exciting and heartfelt story of family, connections, and finding the right path that we should take.
In this regard, I have here our top 10 anime like Somali and the ForestSpirit that I am surely excited to share with everyone as follows:

Kaze no Tani no Naushika – A classic from Studio Ghibli (those the movie was actually released right before the studio had been officially founded). This is one of the best anime movies that I have seen with a very strong message behind its drama and solid storytelling. It tells a post-apocalyptic era where humanity was in decline with threats from the danger of the decaying world which had been originally caused by human exploitation of the planet for so long. Nausicaa of the Valley of the Wind gave us a strong message that we should take good care of Mother Earth for the sake of the future generation.

Children of the Whales

Kujira no Kora Wa Sujou ni Utau – We have here one of the most visually appealing anime that I have seen throughout my life. When it comes to the world-setting aspect, Children of the Whales is just like Somali and the Forest Spirit on which it lies inside a whole universe different from any other. The vibrant color, beautiful visuals, and unique art style make the two of them on a league of their own when it comes to visual appeal.

Gin’iro no Kami no Agito – This is another movie set in the future where people were driven to almost extinction but there’s still some silver lining situated within the story that could save the world from total decline. Just like Somali and the Forest Spirit, this anime has quite a solid world-setting regardless of how average its screenplay was. 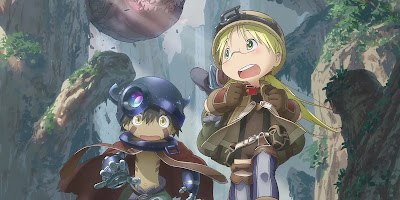 Meido in Abisu – Definitely one of the best world-building that we had witnessed from any anime in recent years, Made in Abyss could easily compete as one of the closest one to Somali and the Forest Spirit when it comes to having a world of its own. Both the story and the graphics are top-notched with heavy emotional soundtrack and narration.

Maquia: When the Promised Flower Bloom

Sayonara no Asa ni Yakusoku no Hana o Kazarō – Here we have a maiden who doesn’t get old and took care of an orphan until he grew up to be an astounding adult and later one influenced his life until the day he’ll die. Maquia is an anime movie that shows us a relaxing and exciting story of motherly love on a different degree.

Udon no Kuni no Kin’iro Kemari – This anime one of those refreshing story with great life lessons to learn at despite how simple and ordinary the plot is. A heartwarming story that tackles an unlikely relationship of a seemingly unusual pair of two individual. It’s story is a cheerful one that thrives in its simplicity compared to elaborated conflicted story of other anime series. If you want to relax and simply enjoy a well-written anime story, then Poco’s Udon World is one that I would like to recommend and it falls not so far from what Somali and the Forest Spirit is trying to serve to our plate.

Mahō Tsukai no Yome – An orphan who has great potential had been rescued by a powerful mage to be his bride is the main heroine of this beautiful and astonishing anime. The Ancient Magus’ Bride could definitely compete with Somali and the Forest Spirit when it comes to animation quality and visual aesthetics. Story-wise, there are some similarities and differences but the story of these two anime still meets at some points as common cliché.

Barakamon – While it doesn’t have the same plot as the Somali and the Forest Spirit or even The Ancient Magus’ Bride – Barakamon is an inspiring anime that just like the two previous anime that I have mentioned is filled with such beauty and positivity. Barakamon tells us a heartfelt story of finding oneself while also meeting wonderful people along the way that will help you to truly discover your real purpose in life.

Uchi no Musume no Tame Naraba, Ore wa Moshikashitara Maō mo Taoseru Kamoshirenai. – A demon child had been raised by a hero and almost everyone in town loves her, then it doesn’t fall far from Somali and the Forest Spirit. In this anime, we had a demon child who was showered with love and learn so many lessons in life after she had been rescued by our hero in one fateful day. Furthermore, our little demon girl Latina turns out to be one of the most adorable anime characters that we had in 2019.

Bakemono no Ko – The anime film from Mamoru Hosoda follows the story of a young boy who got lost into the yokai world and eventually became the apprentice of a beast. Later on, he had been treated by almost everyone in the yokai world as the child of a beast. The Boy and the Beast in an exciting family drama with lots of action and humor which will make you smile big time and cry a river right after watching it.
Alright, so I will end this list here and I am hoping that I am able to provide you an interesting list or alternative that you could enjoy while keeping Somali and the Forest Spirit anime adaptation in your watchlist for this season. Have you watched any of the anime that we had mentioned above? Are there any titles that you would like to be suggested to be added to this list? Please let us know by leaving your comment below and subscribe to Yualexius.comfor more interesting editorials about anime and Chinese donghua.