You are here: Home / Uncategorized / The Best Chinese Anime I’d Watched So Far…

Hey guys, I’ve been a sucker to Chinese anime lately, all thanks to The King’s Avatar. I’ve been pretty captured by its animation and interesting story that its conclusion left me in awe and wanting for more. Good thing a second season for The King’s Avatar had been announced.
On my end, this binge of watching Chinese anime began with The King’s Avatar, although the very first Chinese anime that I’d seen is The Legend of Condor Hero. What about you, which Chinese anime influence you or introduced you to donghua culture? For beginners who doesn’t watch any donghua (Chinese anime) yet, it’s the time for you to check it out since it goes mainstream nowadays. You may check our list of interesting Chinese anime recommendation.
Nonetheless, the following donghua are those that I had watched and had been fascinated by it. Though some Chinese anime may be repetitive when it comes plot or subjects, and may have some dull animation, there are definitely hidden gems from its rank, you just have to thoroughly look for your cup of tea from its wide arrays of selection.
So, here are the list of my top recommended Chinese anime that truly captured my attention.

What I could say is that this anime is the epitome of an astounding and amazing Chinese animation. I could actually even put this higher than majority of anime series from Japan though the story needs a very minor improvement. Nonetheless, it’s all great and interesting enough to keep you on your chair excitingly and wanting for more in every episode’s conclusion. I only discovered this anime few weeks ago, it’s a part of our list of Chinese anime airing this 2018. I’m Joybo is a romantic anime with fascinating soundtrack, beautiful visuals, and mild ambiance of nostalgia. It’s story is quite relatable and truly enjoyable with melodramatic twists.

A 3D animation which I really find beautiful with quite intriguing and interesting plot. It’s a Wuxia story mixed with a somewhat video game like set up. It really looks like Chinese meets Nordic vibes with awesome and fantastic fight scenes. The animation is also decent, though it has a very typical element which is rampant in every Chinese anime, and it’s about a somehow O.P. main character.

If you’re looking for a hilarious story, I’m seriously telling you not to lose a grip on this anime. Every single second is worth when we’re talking about comedy here as this had been one of the most ridiculously funny anime that I had ever seen. Although some of its punchline are definitely below the belt and seriously sounds ravage. Animation wise, it’s not bad; soundtrack is decent with various ambiguously funny characters.

The Legend of Condor Hero 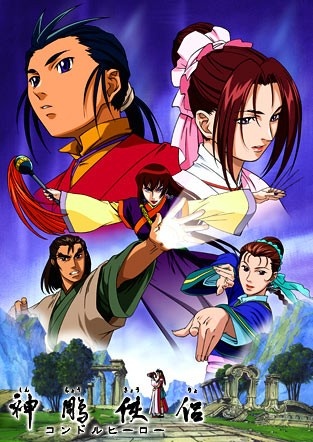 I can’t simply ignore this anime because of the fact that I am a die-hard fan of the 2006 live-action version of this story, The Return of the Condor Heroes. The story itself is enough to keep me lost in it and it seriously looks vintage much to my personal delight.

Another cutesy anime in this list, the very reason why I easily fall for romance story is the fact that it is relatable and you won’t get disappointed immediately if the animation or special effects may have some flaws unlike to action story which attention of detailed animation and almost perfect execution is necessary. Nonetheless, Lan Mo’s Flower is a romantic-comedy Chinese anime that you’ll easily fall for, I could relate its vibes to Ao Haru Ride plus Snow White with the Red Hair.
That’s just few of those many Chinese anime that I had seen, although some isn’t interesting enough while some are decently done but just didn’t fit to my cup of tea. Nonetheless, my other recommendations include the following:
What about you? Will you care to let me know your favorite Chinese anime? I may ended up liking it too. Let us know of your thoughts about donghua by dropping a comment below.