You are here: Home / Reviews / Planting Manual Donghua Review: On Tales of Fairies, Tragic Past & Conspiracies

Fairies and isekai stuff aren’t new to anime viewers anymore, however planting some seeds and producing fairies from it, I think that’s quite new. Yes, we have here this Chinese anime Planting Manual (Yao Jing Zhong Zhi Shou Ce) which is based on the novel Demon Spirit Seed Manual and was one of Tencent’s donghua lineup this 2020. If there’s anything familiar with this donghua is that its story is just another isekai (transmigration) set up with fairies, demons, and time-travel in the past.

In this post, I would like to share my thoughts on Planting Manual. But first, let’s take a short look at its source material, the manhua Demon Spirit Seed Manual or also known as Fairy Planting Manual. The manhua was written by author DAZUI and its anime adaptation “Planting Manual” was animated by Big Firebird Cultural Media. 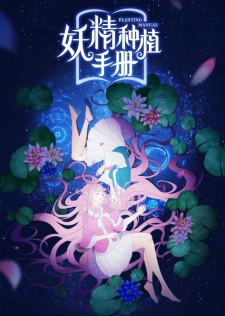 Yuan Ding, an otaku, was transported to another world. After taking Shuo Yue Academy’s entrance exam, Yuan Ding’s life in another world begins, aiming to collect the Demon Spirits said to exist in the legends.

If you’re looking for something good to make the time passes by regardless of its flaws, then you’re up for an interesting isekai ride with Planting Manual. The story is nothing spectacular, it is just another isekai / transmigrated anime series. It follows Yuan Ding, an ordinary otaku who got transported to another world where magic, and different races like demons and people with special powers or cultivation abilities exist. He thought he’ll be like any other overpowered character just like those from other isekai series he had read and watched. However, it turns out he doesn’t possess any special powers but he was given a manual, where he can raise his cultivation level and collect Demon Spirits or Fairies that has legendary powers.

The story of Planting Manual has so much potential and I believed there are various ways to make it even more interesting but it seems that the production team failed in this aspect big time. While it’s far from being the worst, the progress of the story got boring in every episode albeit some silver lining is still left in various scenes but it wasn’t enough to save the whole series from the poorly written story.

However, I have to give credit to the anime that it was able to give me an emotional ride until I had finished it. Those flashbacks about the tragic past of each fairy got me.

What I truly enjoyed from Planting Manual anime adaptation though is the sounds especially with its enchanting opening theme Elegy of Fairies, and the fun ending theme song Bang Bang Bang.

While some people may complain about the voice acting, I think it’s just the general appeal of Chinese animation or donghua. I got used to listening to Chinese dubbed all these years that it doesn’t bother me anymore, just like how I got used to Japanese dubbing. The complaint is understandable especially for anime viewers who only get started watching donghua. But once you guys get used to it, it’ll be pretty smooth later on.

Another silver lining for the donghua is the art style, it looks enthralling; beautiful like a work of magic of any fairies out there. Although there are noticeable flaws, it is something I wouldn’t bother that much since I always emphasize the story itself. I also loved the character designs, it’s pretty neat and decent. Can we all agree that the character designs for the fairies were really beautiful? Even Yuan Ding but it’s quite inferior compared to the fairies that made us fall in love.

The animation quality looks mediocre but tolerable in any sense. There are dull moments but those flaws are nothing big to hinder me from finishing the series. However, I did have some ounce of disappointment for another reason, it is because Big Firebird Cultural Media is animating it, I am now worried about the quality of Hero? I Quit a Long Time Ago / Hero Return donghua adaptation on which the animation studio is also working on it. I just hope the studio will put more effort into it since the novel and manhua have a huge following and they’re expecting too much from it.

Satisfaction wise, Planting Manual anime adaptation has been a tolerable ride for me. I was able to finish it but it took me several months since the first 5 episodes got me bored and I ended up putting it on my pending list later on. After 4 months, I return on watching it and eventually reached its denouement but it also left me craving for more as I seriously believe that we need Planting Manual season 2. As of now, I don’t see any news or updates about it yet but in case, a sequel has been a plan by the production team, I wish they could make it even better.

If you’re asking if I’ll recommend it to anyone, yes I would still suggest it to anyone despite its flaws. There’s no such thing as perfect anime or donghua, it always comes down to the viewers’ preferences. If you decided to watch it, please let me know your thoughts about it too.