Do I look like a normal person to you?

Kyoukai no Kanata or also known as Beyond the Boundary was a 2015 anime from Kyoto Animation and had been a fantastic experience for me as a viewer and someone who was touched by the story on a personal level. I have watched it to write a Kyoukai no Kanata review because the anime was suggested to me by K from K at the Movies blog as part of Jon Spencer Reviews‘ holiday community event Anime X-Change #animexchange.

Let me give you guys brief random talks about it before we proceed with my review. In #animexchange, two anime bloggers must recommend an anime to each other, a series that the other person hasn’t seen yet. And K is my partner for #animexchange, and I have recommended one of the best Chinese anime from my watchlist, guest what? It’s the Grandmaster of Demonic Cultivation or Modao Zushi, if you’re a fan of Chinese dramas, it is also known as The Untamed. I do hope that K will enjoy it. 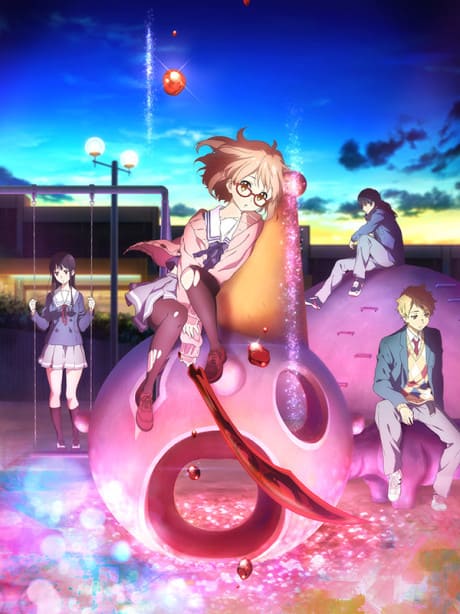 On the other hand, K recommended Kyoukai no Kanata or Beyond the Boundary to me. Truth is, I am quite familiar with the series, I have watched it before but I wasn’t able to finish it till the end 5 years ago. So, I think this is a perfect opportunity to complete it and right after starting it again, I felt bad deep inside that I didn’t finish it before. Meanwhile, I am also glad that I could see its story from a different perspective, from the eyes of the mature version of myself. Thus, I am sincerely thankful to K for recommending this to me.

Let me start this review by giving you guys a short synopsis of the anime as follows:

They should never have met. They shouldn’t even exist. But when they come together, the entire world will change. The last surviving member of her clan, Mirai Kuriyama is cursed with the terrifying ability to control and manipulate blood, a power so heretical that she is shunned even by those with the ability to understand her “gift”. Akihito Kanbara is only half human, but while the monstrous other half of his lineage seems to have doomed him to a life alone, it has also given him near invulnerability in the form of rapid healing. Alone, their futures seem bleak, but when a chance encounter brings them together, it becomes clear that they share more than just an unexpected bond. Together they share a destiny and a mission that only the two of them together may be strong enough to survive. (Source: Sentai Filmworks)

First of all, Kyoukai no Kanata is an anime that touches a specific theme, and that is loneliness and a sense of detachment from the people around you. As someone who had been an introvert deep inside and a piece of an antisocial jerk, this anime really hits close to home. However, the anime also touches other genres like comedy, supernatural, and action. I must say it tries to display demon-slaying cliche in the surface and its hilarious humor while meticulously narrative the mild drama from its core.

Kyoukai no Kanata centers around two characters – Akihito Kanbara and Mirai Kuriyama. These two characters are easy to like because, at one point, they are the characters that reflected a part of ourselves. As someone who always felt like an outcast in my circle, this is a story where I could relate myself with. As someone who always felt left behind and doesn’t even want to open his heart to people, this anime means a lot to me. I am taking a look at this anime retrospectively, as I also reflect on my younger self through the behavior of the characters that I can relate to.

Personally, I see myself a lot in Kuriyama Mirai, someone who distanced herself and close her heart to avoid getting hurt. Someone who hates herself due to her own circumstances that she can’t control. She has the special abilities to use her blood as a weapon, thus other people, specifically Spirit Hunters thought of her clan as a cursed bloodline. Being shunned by people, that must hurt so much. However, her world had been turned upside down by the arrival of Akihito Kanbara in her life. The reason behind their meeting might be unfortunate, but it sure destiny enabled their path to cross.

Akihito Kanbara on the contrary is like the total opposite of Mirai. Even the viewers can be fooled, he is such a flamboyant character who seems to be like by many on the surface. While he has people around him who he can get acquainted with, deep inside he loathes himself. As a half-human and half-dreamshade (demon-like creature), he is the vessel of the “shade beyond the horizon” and this is the reason why his friends and acquaintance also keep an eye on him. He houses a dreamshade with the potential to destroy the world, just like Mirai, he feels alone deep inside and treated himself like a demon, a loathsome immortal demon.

The story of Kyoukai no Kanata revolves between them and the sense of belonging they both found in each other. How amazing it can be that two souls who feel like they had been abandoned by the world found refuge in one another? That might have amazing. That might have been crazy. That must have been destiny.

On the surface, Kyoukai no Kanata is still a demon-slaying anime, just like Kimetsu no Yaiba that have the Demon Hunter Corps, we also have here the Spirit Hunter Association, the Nase family, and various Spirit Hunters that made the anime an exciting adventure.

Other secondary characters from the series are also unique and interesting on their own. Most of the time, they are also the main source of comedic relief in the anime aside from Mirai’s clumsiness and Akihito’s glass-fetish? I’m sorry, I can’t find the exact word to use, but it seems like Akihito’s will marry anyone or anything with eyeglasses in them. The Nase siblings, Hiromi and Mitsuki are also fun to be with, especially the sister complex of Hiromi, and the tsundere side of Mitsuki.

I am also captivated by Ayase and Ai-chan, as shades themselves, it is interesting how they are associated with humans. I want to learn more about them. Izumi Nase is also a peculiar character. The moments where she fights dreamshades or even Fujima are all beautiful.

Those fights are among the best animation that Kyoukai no Kanata could offer along with the animated scene of Mirai’s blood which I found hauntingly gorgeous and enthralling.

Now, if I have to ask myself if there is a certain scene from the anime that I would recommend for the whole world to see? That would be the gang’s performance from Kyoukai no Kanata episode 6 where they are fighting the obnoxious-looking plant dreamshade. Akihito, Mirai, Mitsuki, and Hiromi performed an idol-like singing and dancing along with Ai-chan. It’s amazing how that particular scene sums up their relationship and the walls that separate them gradually subsides.

To share such a wonderful performance with my fellow anime fans, I have shared it below.

To wrap this review, here is the highlight of my thoughts about it:

This is where I shall end my review of Kyoukai no Kanata. I felt grateful that I am able to re-discover this gem through #animexchange and K, this has been an amazing ride, thanks a lot.

Let me drop this gif that makes me a bit envious, we all need a friendship like this:

And if you guys haven’t watch Kyoukai no Kanata yet, let me give you a word from the phrase of Kuriyama Mirai: “How unpleasant!“. ^^

Alright, it’s the Christmas season already and I hope you guys are having a great holiday. See yah!