On October 27, 2020; 16 anime has been unveiled during the Netflix Anime Festival 2020: The Future of Anime, Together. These anime will be released by Netflix exclusively in 2021 from various animation studio and this is the reason why Netflix previously announced their partnership with several animation studios from Japan such as WIT Studio, Bones, MAPPA, Production I.G., and NAZ to name a few as well as Korea’s Studio Mir. 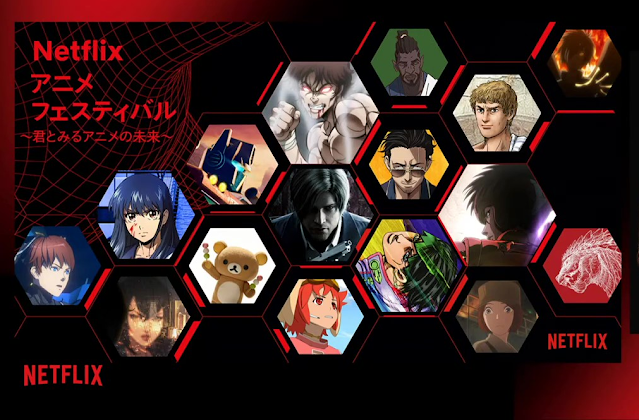 Several of the 16 anime that had been announced was unveiled for the first time in the event while some had been previously revealed. Netflix aimed to release these anime titles in 2021 in over 50 countries exclusively on its platform. Some are sequels of existing Netflix anime series and the others are an adaptation from various source materials such as games and mangas. There are original anime too in the lineup.

The following are the 16 anime from Netflix for 2021 lineup and their corresponding production committee which had been announced in the event as follows:

This horror fiction CG anime is based on the Resident Evil franchise from Capcom and will follow Claire Redfield and Leon S. Kennedy, the protagonists from Resident Evil 2.

The King of the Monsters is back in a new anime series, Godzilla: Singular Point. It is an original story that follows the young geniuses Mei Kamino, a female researcher, and Yun Arikawa, a male engineer, as they take on an unprecedented threat with their companions.

Eden is a mecha and cyborg anime in this Sci-Fi and fantasy world where humans do not exist. It follows the story of the last human child being raised by robots.

Vampire in the Garden

This original anime story gives us a Romeo and Juliet vibe in a post-apocalyptic setting. It follows the story of two girls from different races who went on a journey to find a paradise where humans and vampires could live together.

Yasuke follows the story of the legendary Black Samurai who fought alongside Nobunaga Oda during the bloody feudal era of Japan in the 16th Century. This is a fantasy period-drama that many historical geeks out there will enjoy.

This is the anime adaptation of the blockbuster film Pacific Rim, it follows humanity’s effort to fights back powerful monsters that emerges from the sea and attacked the Earth.

Alright, here’s what I am excited to see since it is based on an award-winning Filipino comic and I am sure that my fellow Filipinos are looking forward to this too. Trese is about the journey of Alexandra Trese, who protects Manila from supernatural creatures such as Aswang.

B: The Beginning Succession

This is the second season of the psychological thriller Sci-Fi anime B: The Beginning.

Baki Hanma is the 3rd installment of the Baki series which has been released by Netflix since 2018. This follows the story of Baki after the Great Raitai Tournament Saga which I did enjoy personally.

This comedy anime is a stress-reliever for fans who are looking for an obnoxious experience. Thermae Romae Novae is adapted from the award-winning manga by Mari Yamazaki and follows the Roman architect Lucius who discovers a hidden tunnel that leads him to a Japanese bathhouse, and creates his spa inspired by it.

This horror-survival anime is an exciting story to follow as it gives us an intense battle royale experience. It follows Yuri Honjo who must survive in a hellish world of kill or be killed set up.

Based on a story by Hirohiko Araki, Shueisha Jump Comics

Fans of Jojo Bizarre Adventure will have a fantastic time next year as the spin-off of Diamond is Unbreakable is getting an anime adaptation. It follows the story of Kishibe Rohan who travels around the world to get inspiration for his manga from people’s lives.

The Way of the Househusband

Based on a story by Kosuke Oono

The Way of the Househusband follows the story of an ex-yakuza boss who retires from crime to become a househusband. Now, this is a plot that truly excites me and I am having this one on my watchlist next year.

Based on a story by Hiroshi Takashige and Ryoji Minagawa, Shogakukan Shonen Sunday Comics

To watch the whole Netflix Anime Festival 2020 event, you may check it at their YouTube Channel at the following link: https://www.youtube.com/watch?v=xQn8H81YSHA

Now, this sounds exciting, isn’t it? Among this lineup, I am personally excited for Trese, as a Filipino, I am looking forward to what this has to offer to international audiences especially knowing how good and popular the original material to Filipino comic-readers. Aside from Trese, I am also excited to see The Way of a Househusbands, Vampire in the Garden, High-Rise Invasion, Yasuke, Thus Spoke Kishibe Rohan and Eden. Yes, 2021 anime lineup sure is promising as aside from this, we also have plenty of most hyped anime titles returning next year. My fellow anime blogger, @geeknabe also shared her own list of anime to look forward from this lineup. You may check her recommendation here: 6 upcoming anime made by Netflix everyone should watch in 2021

Please let us know which of these anime will you add to your watchlist next year? Leave your comment below and your thoughts about it.