You are here: Home / Donghua / Fog Hill of Five Elements Characters: The Envoys, Demons, and Humans

Lin Hun and his Samsara Animation Studio had set the bar so high for Chinese animation standard with their masterpiece project Fog Hill of Five Elements (Wu Shan Wu Xing) which was released last July 26, 2020, at bilibili. The project was one of 2020’s most highly anticipated donghua or Chinese anime and people who had seen it just can’t get over it and looking craving for more. 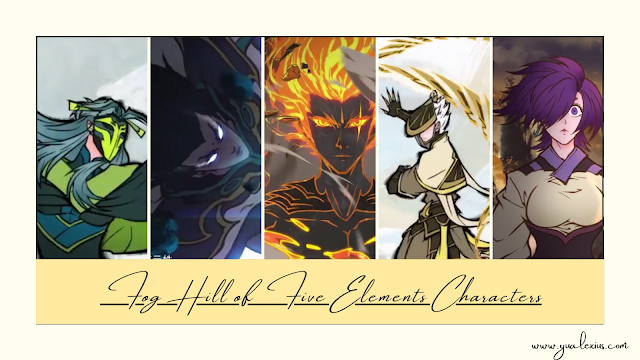 Fog Hill of Five Elements is an ambitious project which had been 3 years in the making and its director Lin Hun had exerted great effort in this intricate creation. The first 3 episodes of Fog Hill of Five Elements were created with studio Samsara’s 6 main staff members and 3 interns. The donghua was produced by Nice Boat Animation and streamed at bilibili. While doing some more research I saw some people asking if Fog Hill of Five Elements is available at Crunchyroll, unfortunately, this donghua is only distributed legally by bilibili right now. Hopefully, it’ll be licensed outside of China and will be released to a wider audience in the future.

Alright, back to the actual purpose of this post, I would like to make an introduction to Fog Hill of Five Elements characters. While the donghua had few characters to showcase, it is nevertheless that every one of them recognizable. That is because Fog Hill of Five Elements characters’ design was drawn beautifully and uniquely. It has a signature style that unique to the donghua itself just like its animation quality was. 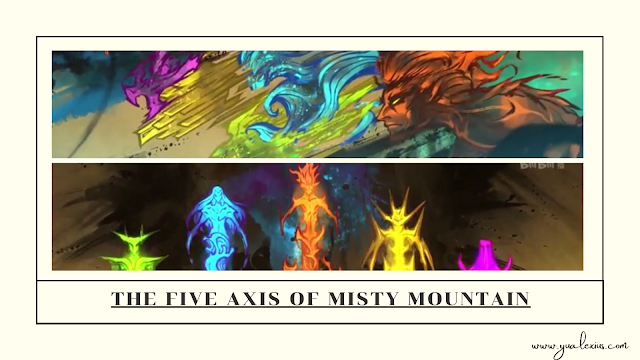 Known as the 5 elemental envoys or aspects of the Misty Mountain which indirectly refers to donghua’s title. They the 5 envoys that possessed special abilities of 5 elements and they serve as the guardians of a special portal in the Misty Mountain that separates the realm of humans from the Unpromised Land or the realm of demons. The closest comparison that we can do for them are benders from the story of Avatar who could control the 4 elements. In this donghua, they are known as the 5 elemental axis, or aspects or envoys; they got their powers fro the Qi of Yin Yang of the world. They are responsible for exiling the greater demons in the Unpromised Land and guard that portal that connects the two realms. Furthermore, they also guard the 5 walls of the Misty Mountain separately to restraint the lesser demons from rampaging. Just like Yin and Yang, the 5 envoys maintain the balance between humans and demons. 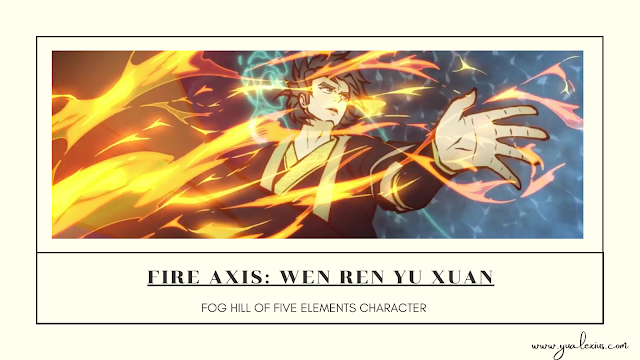 We had here the main character of Fog Hill of Five Elements, Wen Ren Yu Xuan who served as the Fire Envoy of Misty Mountain. He was widely featured in the first 3 episodes of the donghua where we had seen him fighting the Sacred Beast Qilin or Kirin to acquired its help in curing his mother Lin. In Fog Hill of Five Elements Episode 2, Wen Ren Yu Xuan fought the Beast of Wrath or also known as the Peacock Demon who is searching for the lost son of Qilin.

Most of the fight scenes of Fog Hill of Five Elements were from the showdown of the Fire Envoy and the Beast of Wrath. Wen Ren Yu Xuan could manipulate fire at his own will and use it for offense and defense. He is also skilled in martial arts as we had seen him when fighting demons while also enhancing it with his fire manipulation ability. He also could heal his injury. 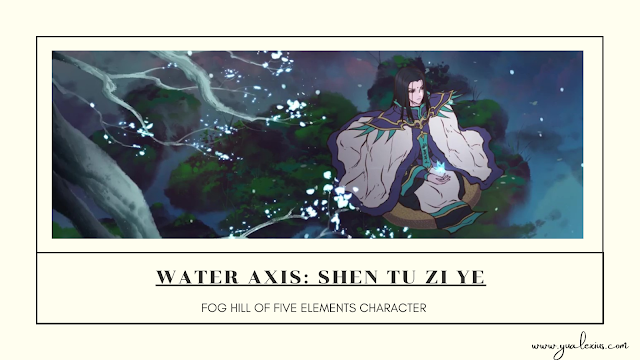 I often saw people searching for “Fog hill of the Five Elements Water“, alright, so we shall talk about him here. The Water of Envoy of Misty Mountain is Shen Tu Zi Ye which was first featured in 2017’s short teaser of Fog Hill of Five Elements where he is fighting the Fire Envoy Wen Ren Yu Xuan. Shen Tu Zi Ye could control the water element and even convert it into an ice attack to freeze his opponent. 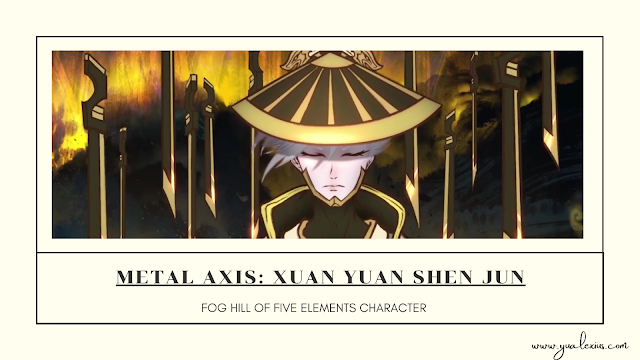 Here’s one of my personal favorites from the donghua due to how cool his skills are. Xuan Yuan Shen Jun is the Metal Envoy and while we don’t see him in full action yet, he seems to be among the aggressive envoys in the story as shown how he can wield those metal blades of him to attack his enemy. Furthermore, his whole appearance looks appealing and cool along with his metal blades and the way the studio animated it. 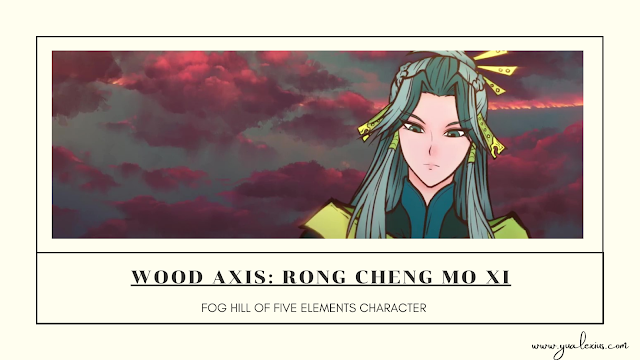 She’s one of the characters from Fog Hill of Five Elements that I think is shrouded in mystery. Hadn’t seen her in a fight yet but her powers are wood elementals, so maybe we can expect something similar to Hashirama Senju’s ability. Additionally, Rong Cheng Mo Xi sure looks beautiful and pristine. 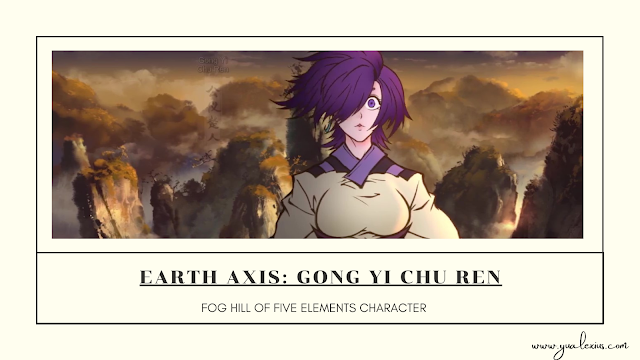 Another female member of the envoys, the Earth Axis, Gong Yi Chu Ren could manipulate Earth.

In Fog Hill of Five Elements, we had only seen one village where human resides and that’s where most of the human characters from the story live. 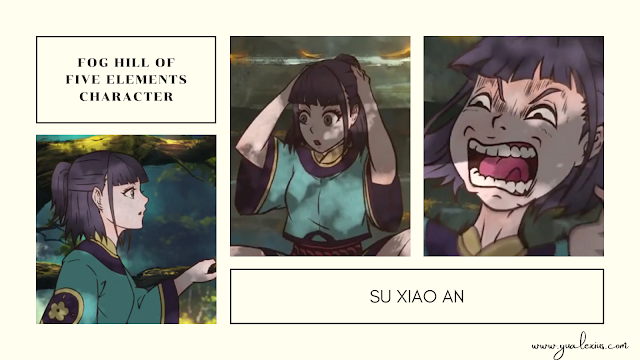 Among the humans in Fog Hill of Five Elements, I think our favorite is Su Xiao An who did give us a good laugh during the pilot episode of the anime when she first met the Fire Envoy. She’s the daughter of the village chief.

The Leaders of the Di Shan Village

The 7 leaders of the village are the ones that taking care of the village and other stuff involving it. It seems that each leader has their respective roles in managing the village. I am not able to get all the names of these 7 characters (but I’ll update it here once I got it). For the meantime, here they are: Each of them was called by their nickname or title according to their seniority as follows: 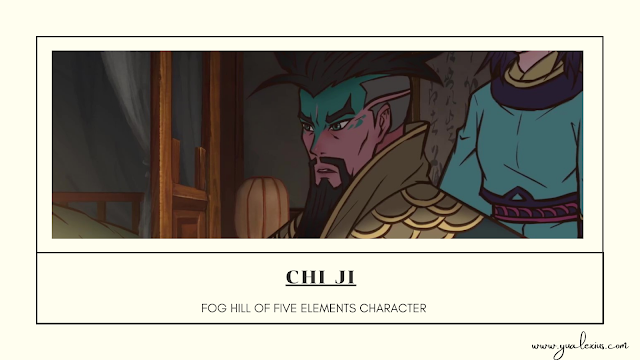 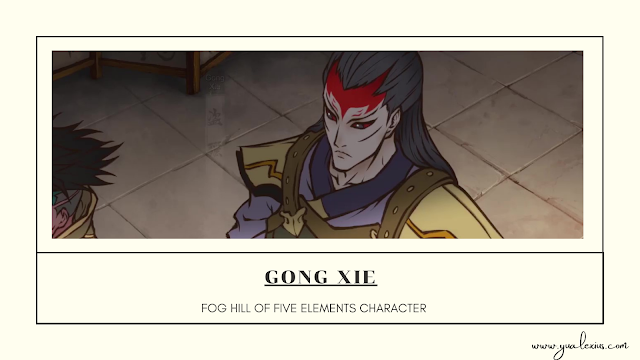 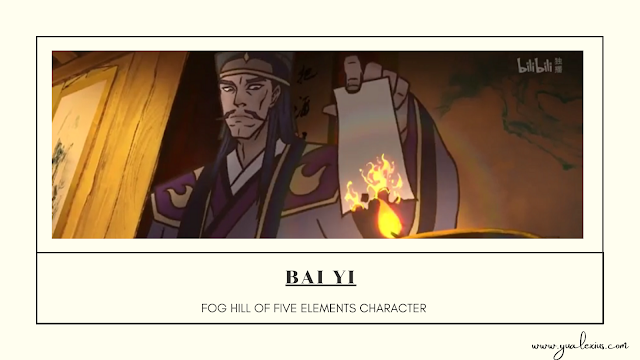 He is the village chief and physician, he is also Su Xiao An’s father.

4th Elder: Unknown (didn’t appear in the donghua yet) 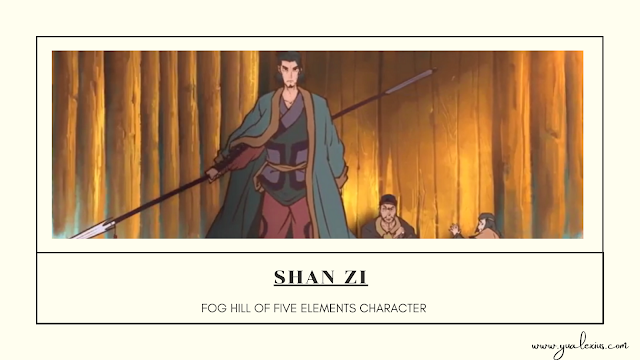 He is the spear-wielder that fought the demons in the first episode of the anime. 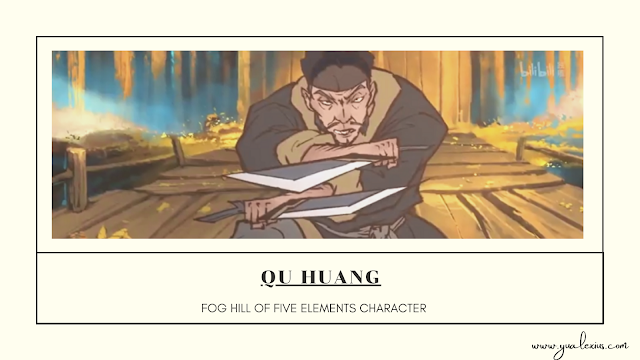 He is the dual-blade user that fought the demons in the first episode before the 5thelder. 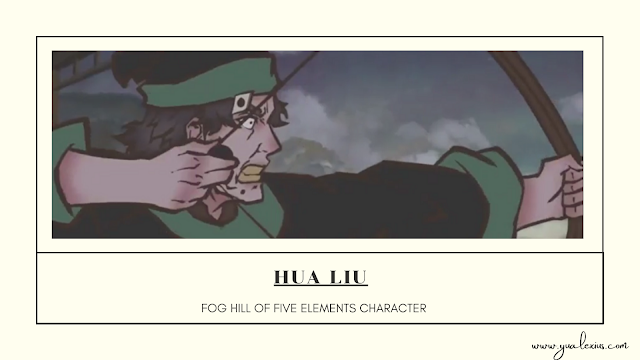 He is the youngest in the group and the one that attacked the demons by firing grenades to them to assist the 5th elder. He looks like more of a scholar than a fighter among their group. 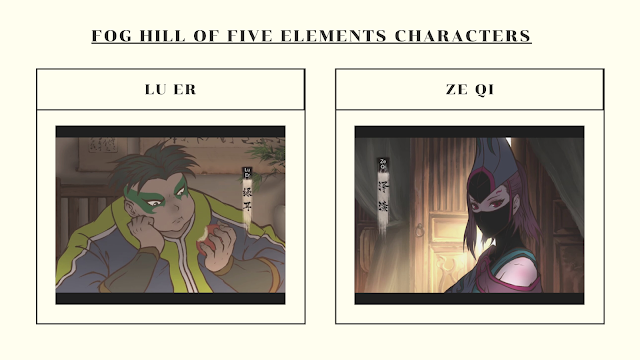 During the Fog Hill of Five Elements Episode 3, two more characters were introduced along with the 1st and 2nd elder; they are Ze Qi and Lu Er. 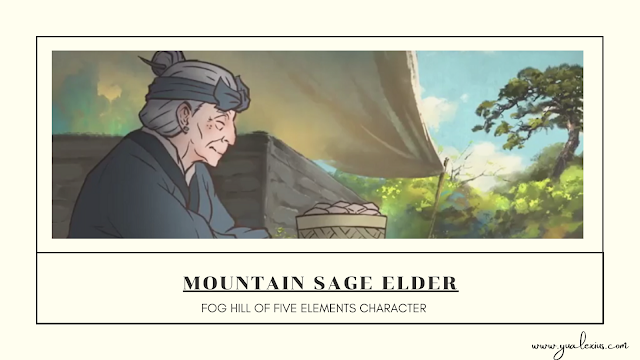 We also had the Mountain Sage Elder who seems like to be the village priestess. 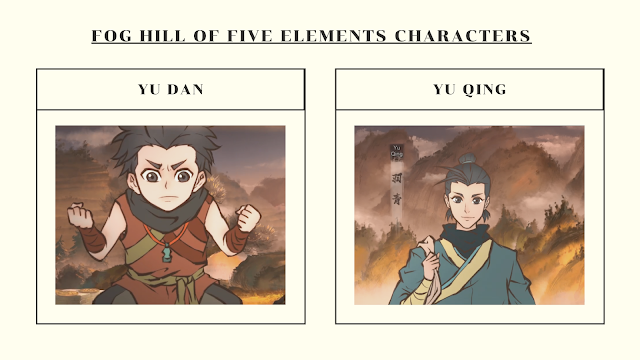 In Fog Hill of Five Elements Episode 2, the Yu brothers were introduced: Yu Qing and Yu Dan. They appeared in a short period of the time in the anime but we were captured by their brotherly bond and how unfortunate had happened to them (I’m still sobbing about it, seriously). Lin & Yuan Shu were the two humans that were shown in the first episode of the anime when the Fire Envoy opened the portal and summoned the Sacred Beast Qilin. It seems that they are relatives of the Fire Envoy and the Water Envoy. 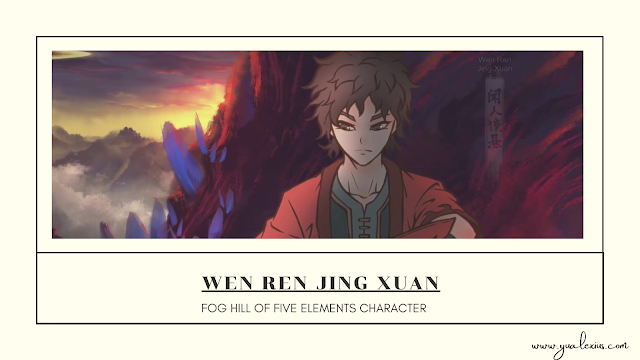 A character shown in the ending part of Fog Hill of Five Elements Episode 3, he seems like a relative of the Fire Envoy, probably a younger brother.

Just like any donghua out there that involved the rich Chinese culture and folklore, Fog Hill of Five Elements also has demons in their story. These demons are not presented as villains, in particular, however, the threat they pose is obviously what makes them dangerous and what makes the human fear them.

The Fog Hill of Five Elements had shown us that humans do not universally represent the good, and demons as the evils. The donghua had presented us with the story of Yin and Yang. It has shown the evil side of humans but at the same time their weakness, their vulnerability. Meanwhile, demons are not necessarily evil in general, as there’s a natural order that balance everything in this world.

And here’s the list of Fog Hill of Five Elements characters from the demon realm. 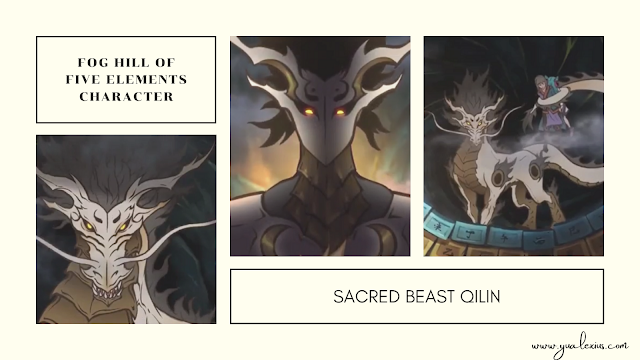 Also known as Kirin in some translation, the Sacred Beast is what the Fire Envoy summoned in the first episode to cure his relative but eventually failed. Qilin has the special ability to heal any illness and also a powerful demon as shown when both the Fire and Water Envoys can’t defeat him. 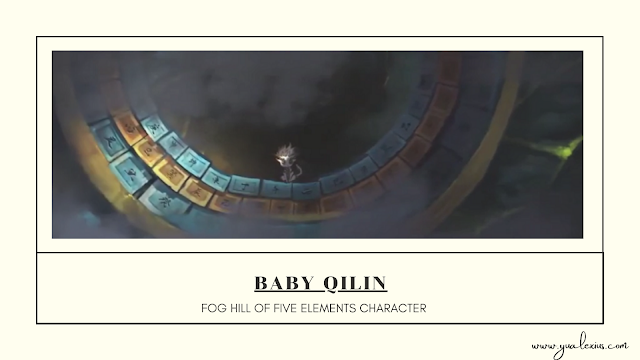 The child of the Sacred Beast that got lost in the human realm. He was captured by the human and detained at the village. The human then experimented with him as they used his scale or skin as a medicine to cure their illness. The existence of Baby Qilin in the village is the reason why the demons attacked them in search of the little demon. 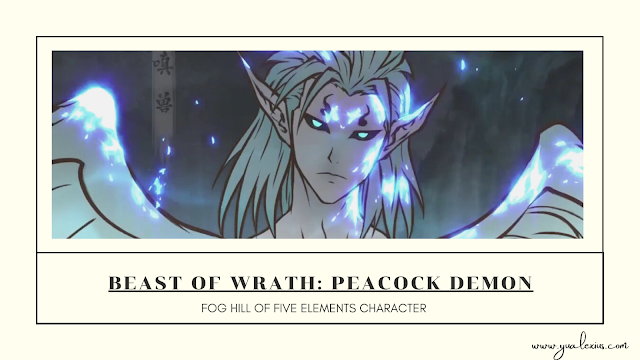 A powerful beast that attacked the human village in search of the Baby Qilin and was defeated by the Fire Envoy. However, he did cause huge damage to the village, resulting in the deaths of many people including the 6thvillage elder and Yu Dan. Fog Hill of Five Elements Episode 2 had highlighted his epic fight against the Fire Envoy.

Beast of Insanity & Beast of Greed 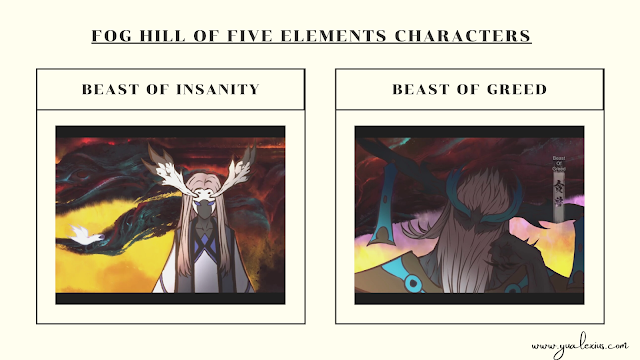 These two demons were among the characters that were introduced in Fog Hill of Five Elements Episode 3 and it seems they’ll be the main antagonists in the future episodes of the donghua. We can expect them to be as strong as the Beast of Wrath as it seems that they are superior compared to other demons. 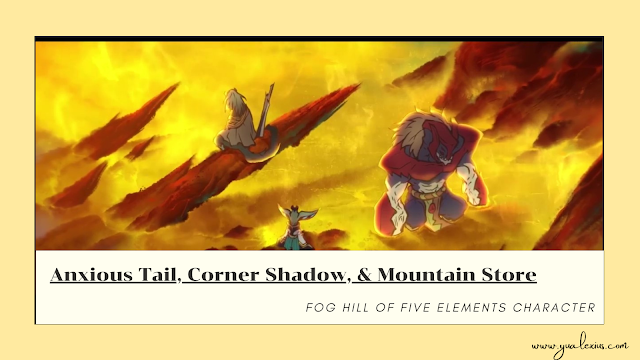 Before the 3rd episode ended, the Beast of Insanity assigned the task of bringing back the little Sacred Beast to these three demons: Anxious Tail, Corner Shadow, and Mountain Store. 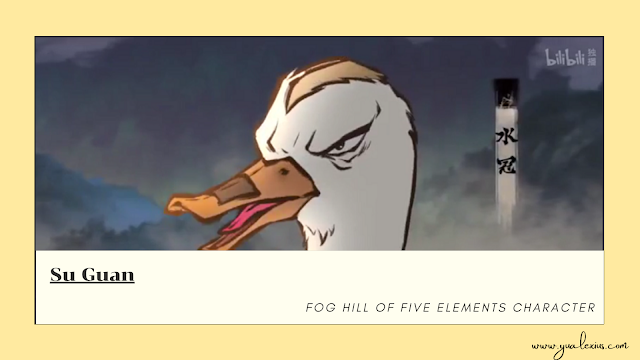 I am not sure if he’s a demon or not but I have to put him here, Su Guan is the talking duck from Fog Hill of Five Elements episode 1 and the companion of the Fire Envoy.

If you’re even wondering if Fog Hill of Five Elements had a novel or manga, unfortunately, the answer no because this is an original project. Therefore, we won’t be able to know what will happen next in the story, thus, we should look forward to its continuation on their next release.