The Promised Neverland, one of the most popular and hyped manga series from Shueisha’s Weekly Shonen Jump by Kaiu Shirai and Posuka Demizu is getting an anime adaptation on January 2019. It may be almost a half year before it’s target premiere, the first trailer for The Promised Neverland had been unveiled featuring the voice  that will give life some the characters of Emma, Norman, and Ray. 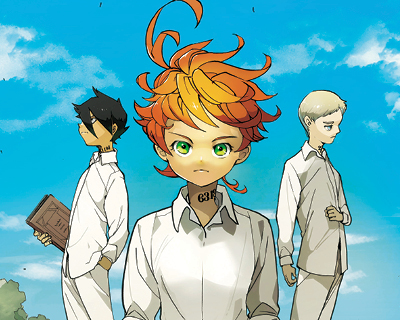 Although the first trailer for The Promised Neverland TV anime didn’t revealed the cast yet. It somehow stir some heat among the readers of the manga and had the fans speculate and theorize who will voice the following characters: Emma, Norman, and Ray. At the top of the fans theories are the following voice actors: Sumire Morohoshi to play Emma, Rie Kugimiya to play Norman, and Mariya Ise to give voice to Ray. All of these actors had been a part of mainstream anime series in the past.

The production of the anime will be handled by CloverWorks but the staff weren’t confirmed yet.
For those who are unfamiliar with The Promised Neverland, here’s a brief excerpt of the manga.

“Emma, Norman and Ray are the brightest kids at the Grace Field House orphanage. And under the care of the woman they refer to as “Mom,” all the kids have enjoyed a comfortable life. Good food, clean clothes and the perfect environment to learn—what more could an orphan ask for? One day, though, Emma and Norman uncover the dark truth of the outside world they are forbidden from seeing.”