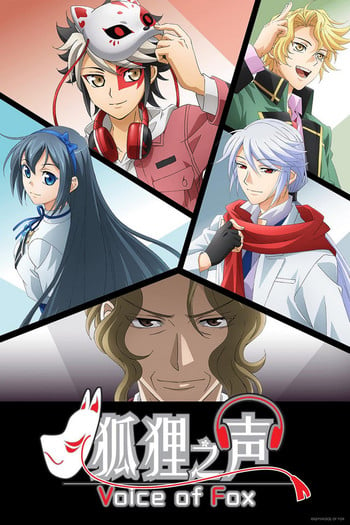 Many fans of the series might be asking especially those who didn’t read the manhua, “Is Voice of Fox a BL?” That is quite hard to answer but here we have the synopsis of the donghua that might give the fans some idea about it.

The ghost singer with the fox mask who can carry a tune and the idol who can’t sing at all take on the world of entertainment together! Hu Li hides his face and ghost sings with his amazing voice. Kong Que is good looking, but can’t sing to save his life. The two of them will butt heads with each other, and their rivals, as they climb the stairway to stardom. [Source: Crunchyroll]

Here’s a short overview of Voice of Fox anime adaptation. The series is animated by TYO Animations or Yumeta Company. It premiered on October 5, 2018 as part of the fall lineup and ended on December 21, 2018. It run for a total of 12 episodes with 14-minute duration.
If you wish to watch Voice of Fox or Kori no Koe, you can check its official site:  Kitsune no Koe or its page on Crunchyroll here: Voice of Fox
Kori no Koe is among the exhibitions listed to be shown at the booth of video game developer Success Corporation. This is inline with the annual AnimeJapan industry exhibition which will take place at Tokyo Big Sight on March 22 to 25, 2018.
The musical-comedy manhua had been known locally as Huli zhi Sheng and published by Yizhou Manhua magazine since June 2015. It was previously revealed by the Chinese web portal Sohu that the manhua is among the titles considered to be adapted into an anime this 2018. And we finally have it now, Huli zhi Sheng is getting an anime adaptation as Kori no Koe (Kitsune no Koe) or also known as  the Voice of Fox.