Hey guys, Divosaga’s 5thsession of its Overseas Guild War officially kicked off last May 9, 2016 and it was seriously an exciting one. It has been 3 or 4 months already since the last cross-server guild war and some guilds rose up with very high power, some maintained its average guild power, while some perished and get absorbed by stronger guilds.
The 4th overseas guild war of Divosaga was won by Outlawz_FC, and they’re still among the contenders to get the title once again despite of their loss in the round 1 of the preliminary against Aku♥Indu, currently the game’s strongest guild with over 80 million guild power. So, let’s discuss about the results of Divosaga’s CSG Session 5 round 1 this time and maybe we can make some predictions on which guild may enter the Diamond Group in the finals.
Anyway, let’s first take a look in the guilds ranking based on their guild power before the cross-server guild war begin. Aku♥Indu is standing majestically at the top of the ranking, followed by Outlawz_FC (won the cross-server guild war thrice) and came in third is Virterium (merged Virtual and Imperium). In the fourth place is MynDestiny which won the (CSG session 3) and also came in third place in the previous cross-server guild war. Mastermind which is mainly comprised of former members from Empire, HOPE and Unity made in 5th place in guild power ranking and they currently have some of the strongest players in the game including Xask, Arcadia777, and SisterMercy. Came in 6th place is UNITY which lose most of its strong members to Mastermind after a terrible internal conflict in the past few weeks. Despite of being the oldest guild with most of their members came inactive, SHIELD is still in a force to reckoned with as they’re on the 7thplace of guild power ranking and they’re consist of few but really powerful players. Other guilds in the Top 10 of guild power ranking include Se7en, Aussie’s Dropbears, and Taurus.
Below is the list of all participating guilds in Divosaga CSG Session 5 based on their power ranking. 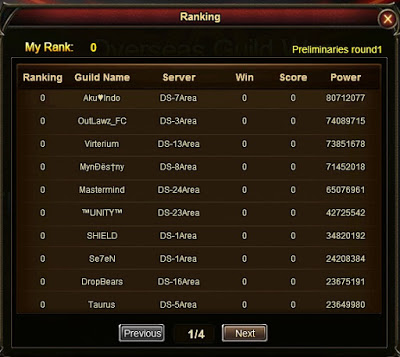 In the round 1, Aku♥Indu defeated Outlawz_FC in a very close fight with around 1300 scores difference. I am pretty sure that these two guilds will soon face each other once again in the Finals and I am around 80-90% sure that they’ll be part of Diamond Group (P.S., Andiwijayaa don’t go shopping while playing ^_^). Meanwhile, it seems that Virterium annihilated MynDestiny with the latter only got 868 points in their match. It is a very surprising outcome since the guild power of both guilds is very close and they both have very powerful players.
Mastermind pounded UNITY so bad, now that’s a very bad scenario for the latter as they fight some of their former stronger members who left them. But I guess, both guilds enjoyed the fight though. On the other hand, SHIELD defeated their fellow guild from server Aquarius, the Se7en and I dunno but it seems that Se7en take a little downturn lately as I saw some of their members goes inactive and my guild won against them in normal guild wars in our server in the past few weeks.
Dropbears also defeated Taurus, both guilds have close guild power however Dropbears having some O.P. players like Aussie makes a big difference as they totally destroyed Taurus in that round. Now, we had already discussed with my guild that will simply enjoyed our next fight which is against Dropbears, haha. Anyway, we had fun in our fight match too against Epic and we won, though what I had noticed during the round 1 of this CSG is that everyone is having problem logging in and also the blackscreen goes on rampage. I am sure that many players weren’t able to participate in the CSG because of that, and that’s something that the management should work for in the following weeks.
Below is the full result of the first round of Divosaga’s CSG Session 5. 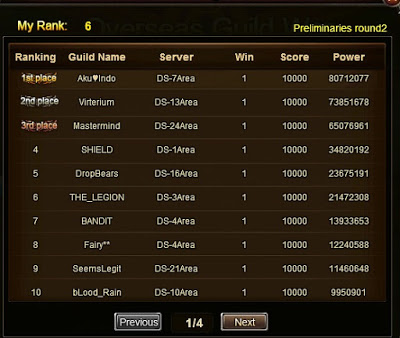 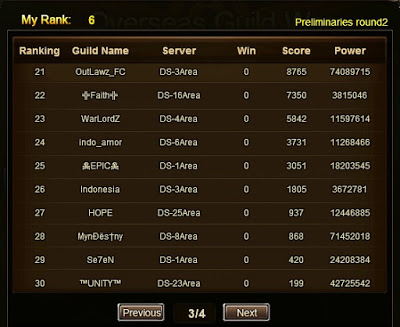