You are here: Home / Anime / Top 12 Most Powerful Demons in Anime
Demons! These are the creatures that devour the souls of the weak. They are the creatures who are cunning, uncanny, treacherous, deceiving, and usually good-looking that every main characters in an anime story needs to defeat in order to save the world. However, that’s not the case in every anime series, some of these demons are the main characters, in fact there are some anime named after its demonic character.
In every anime story, demons usually take the place of the main villain, and sometimes, the supporting role. Whatever role a demon play in a story, they usually take the longer side of the stick when it comes to power, endurance, fighting skills, and intelligence. They are the creatures that appear as the dues ex machina, in most cases they’re simply OP – Over-Powered characters in a story. Of course, there are instances where they also struggle depending on the plot of the story.
Usually, we, as anime fans wants to these demon as the attractive, deceitful, and cunning creatures filled with malice that always erased anything or anyone on their way. As a tribute to these divine beings with exceptional looks, insurmountable powers, immense physical strength, and irresistible charisma; Yu Alexius team is bringing this list of 12 most powerful demons in anime. These 12 characters are from different anime series, usually those from the supernatural-thriller genre.

This boss demon from Black Butler can take down an army of mercenaries with silverware. He is the epitome of a perfect demonic anime character. Sebastian is highly skilled in any area and handles every task, no matter how impossible it is.

This pretty boy is not your ordinary demon who does promiscuous and pure evil things. He is probably one of the most handsome demons out there in the anime world. In addition, he’s not only a pretty face but an entity with unbelievable strength and overwhelming demonic presence. He’s prowess in swordsmanship is of high caliber. Sesshoumaru is a powerful dog demon and feared throughout the feudal world.

Kurama, more commonly known as the Nine-Tails (Kyubi), is one of the tailed beasts. Centuries of being sought after as a tool for war and regarded as a monster that felt no emotions and deserved none in return caused Kurama to hate humanity. Kurama is widely known as the strongest of the nine tailed beasts. Despite its power being halved, Kurama remained strong enough to take on five other tailed beasts at the same time.

Dante is a mercenary, private investigator, and demon hunting vigilante dedicated to exterminating them and other malevolent supernatural foes, a mission he follows in pursuit of those that killed his mother and corrupted his brother. He is the son of Sparda, a demon of great power and as a result of his heritage, he possesses numerous powers beyond that of any human, which he uses in combination with a variety of weapons to accomplish his goals.

Raizen was part of a special type of elite and powerful demon called a Mazoku (loosely meaning the “Tribe of Devils.”
He was also one of The Three Kings of Makai and Yusuke Urameshi’s ancestral father. In the anime, prior to Yusuke’s departure to demon world, Raizen is called Toshin by Hokushin. As this can be translated to mean Battle God, it is likely a nickname rather than a surname. He is also called the Master of War or Warrior God depending on the translation.

Inuyasha was born of a dog-demon father and a human mother. Though he appears to be a teenager, in “Swords of an Honorable Ruler”, which is not wrote by the author, it is revealed that he is over 200 years old. In addition, according to the official Inuyasha guide by Rumiko Takahashi, his appearance is equivalent to that of a fifteen-year-old boy. Inuyasha initially wanted to use the enormous power of the Shikon Jewel to become a full-fledged demon. Inuyasha has dog ears, claws on his fingers, sports a red garment called the Robe of the Fire-Rat and is always barefoot, which comes in handy when he has to scratch himself with his feet, the way a dog does. 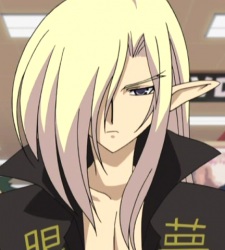 In the anime Macademi Wasshoi!, Agaliarept is a highest-rank demon and ironically trying to save the world. He is also a friend of Gabriel, the archangel. She even calls him Aga-rin as a nickname.

Naraku is a cruel, cunning, andmanipulative demon who will not hesitate to sacrifice his allies in order to succeed with his plan. He is a strong demon on his own, however he always resort of deceptive ways in order to win a battle. That’s what makes him a shameless and treacherous anime character. Despite of all his wicked attributes, he is a very attractive demon.

Rias Gremory, a pure-blooded devil and the sister of Lucifer himself… well, maybe not that Lucifer, but still a devil in his own right. Rias, better known as the Princess of Destruction, is among the many women who fall in love with Issei Hyoudou, the Harem King himself.

Madara, also known as Nyanko-sensei is a powerful beastly youkai who more commonly takes the form of a maneki-neko ( “beckoning cat”).

Despite his cute and harmless appearance as a cat, Madara is a very high-leveled youkai in his beast form, and is respected and feared by many lower-leveled ayakashi. Demonstrating his power throughout the series, Madara claims to be the most powerful youkai of them all, and this may very well be true.

Aion is a demon and one of the ‘sinners’. He aims to ‘save’ the world and plans to do this by gathering and harnessing the power of the apostles. He always has a calm demeanour but despite his seemingly gentle nature, Aion is a cruel and dangerous being.

Rikou is a manipulative average 13-year-old, ¼ yokai. He is destined to take over the title of Master of all yokai from his grandfather. Despite of having a yokai blood running on his veins, he is kind and friendly towards human. However, he won’t hesitate to fight his enemies in order to protect those people and things he cherished. In his yokai form, he’s a confident and strong demon who can inspires “Fear” among his allies, leading many of them to join him.
Honorable Mentions: