Yoshimasa Hosoya as Doppo Kunikida (River Mist and Other Stories), a member of the Armed Detective Agency. He carries a notepad with the word “Ideal” written on the cover, and what is written inside are guides for life. He has a straight-laced personality and hates nothing more than schedules going awry. As a partner to the free-spirited Dazai, his troubles never end. 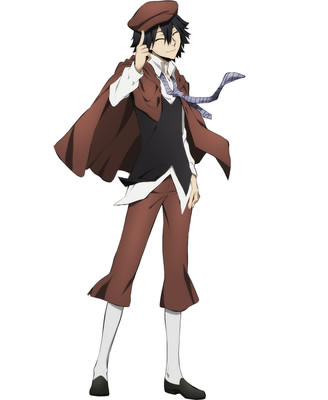 Hiroshi Kamiya as Rampo Edogawa (Private Detective Kogoro Akechi series), the great detective of the Armed Detective Agency. He possesses sharp observation skills that are acknowledged by his coworkers, and he settles difficult cases at the request of the police. Because of his self-confidence, his speech is brazen and child-like. His motto is “If you’ll have me, everything will be ok!”

Toshiyuki Toyonaga as Junichirō Tanizaki (Naomi, The Makioka Sisters), a seemingly-flirtatious young man who wears a baggy shirt and uses a pin to hold back his hair.

Hiroyuki Kagura as Kenji Miyazawa (Night on the Galactic Railroad, Kaze no Matasaburo), a member of the Armed Detective Agency. Before he was scouted, he lived in a rural area without electricity. He knows no suspicion, and will be understanding and considerate no matter who he is talking to. He has a lot of friends who call him “Ken-chan.”

The “battle action” story Bungō Stray Dogs centers around a league of literary figures with supernatural powers. For example, in real life, Ryūnosuke Akutagawa (top left in key art below) wrote acclaimed stories that inspired Akira Kurosawa’s Rashōmon film and the Aoi Bungaku Seriesanime’s Jigoku Hen (Hell Screen) arc. In Bungō Stray Dogs, he has the power to transform and manipulate his cloak into a monster-like entity. Together, these writers solve mysteries as part of the “Armed Detective Agency.”
Bungō Stray Dogs series mainly features Japanese authors as seen from above, furthermore it also featured contemporary Japanese authors and even overseas authors like Dan Brown, Agatha Christie, and Fyodor Dostoyevsky.