The fourth film of Persona 3 film franchise has unveils its new trailer together with a new key visual and an escape game. The new key visual and promotional video for Persona 3 the Movie #4 Winter of Rebirth has been posted on the anime’s official website on Saturday – December 26. In addition, the website also announced the tie-in immersive escape game.

Ryoji: The arcana showed fate and the existence of a cruel destiny that continues to revolve together with time.
Yukari: You’re kidding, right? Ryoji’s a Shadow…?
Ryoji: It erased everything then.
Akihiko: Erased? What did?
Ryoji: The destruction.
Junpei: Dammit…!
Akihiko: Looks like we have to do this!
Ryoji: It’s too bad, but you are unable to touch me.
Fūka: This is…! Run away!!
Yukari: So it’s true? People, animals… They’ll all die?
Mitsuru: The separated Shadows awakened and began to move because he returned.
Akihiko: How are we supposed to fight something like that!? Just what can we do!?
Junpei: …Sorry… That I said it like it was your fault that time.
Aegis: I don’t want to see you all in fear and in pain!
Makoto: Tell me… Ryoji… RYOJI MOCHIZUKI!!
Ryoji: The next spring won’t come in this world anymore.
Fūka: MAKOTO!!
Fūka: The moon is…!
Yukari: What… Is that…?
Aegis: It will fall… At any moment…
Makoto: I won’t let you end it. That’s why I’m going to fight!
Elizabeth: As you are now, you might be able to find the answer to your life.
Makoto’s Mother: Live…
Aegis: I still want to be by your side.
Takaya: I won’t let anyone go past here.
Junpei: Go, Makoto! Leave your back to us!!
Makoto: I think I was able to start living because of the time I spent with my friends.
Aegis: You remember the promise, right!?
You have to… You have to come back, no matter what!! 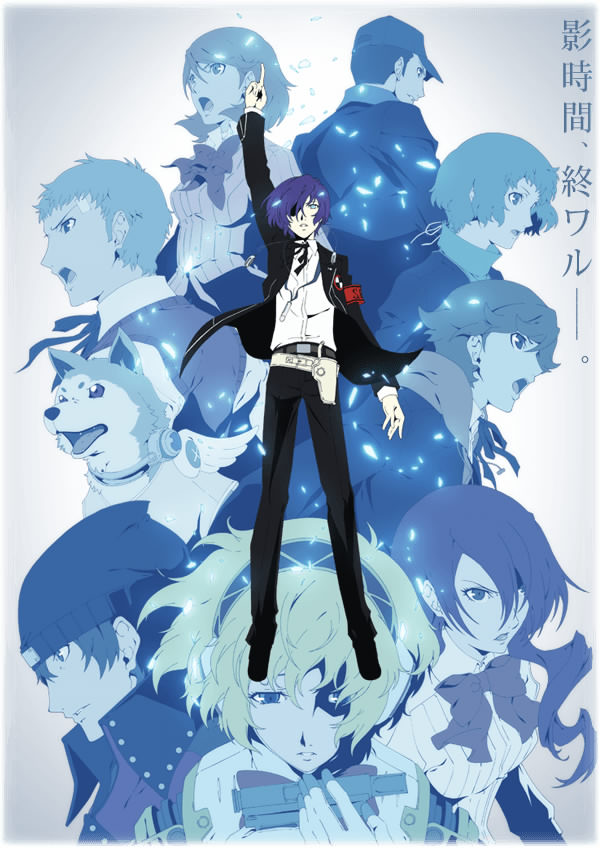 The tagline in the visual above reads, “The Shadow Time, ends….”

“The time of destruction is coming ever closer without a doubt. It cannot be stopped.”
To know death, to gaze at death, to face death.
Makoto and his allies have grown through the many meetings and partings they have experienced.
Their fight might not be for the sake of the world, but for themselves. Even so, they have continued to fight, believing that there are peaceful days waiting at the end of the battle.
However, a boy says that destruction is the fate that humanity must shoulder. The boy they believed to be their friend tells them the truth of the situation without an emotion on his face.
The season changes to winter. Makoto makes a decision in order to greet the spring that is waiting beyond….
Persona 3 the Movie #4 Winter of Rebirth anime filmwill premiere on January 23, 2016 in different theaters in Japan.

An immersive escape game Gekijō-ban Persona 3 ~Kage Jikan kara Dasshutsu~ (Persona 3 the Movie: Escape From Shadow Time) inspired by the film series will be hosted by Tokyo Joypolis from January 30 to March 13.