You are here: Home / Anime / Ao no Kanata no Four Rhythm Anime Cast and Visual Unveiled 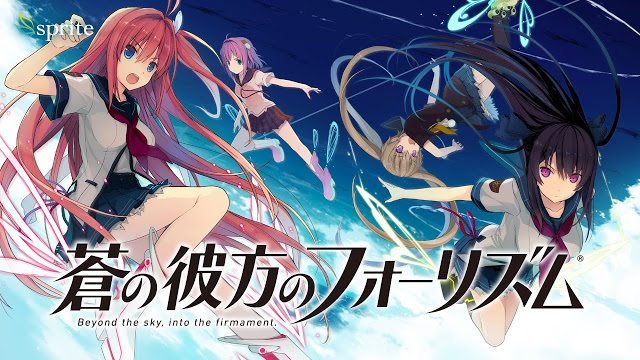 The anime adaptation of the adult game Ao no Kanata no Four Rhythm: Beyond the sky, into the firmamentfinally unveiled its cast members and visual last Tuesday – October 27, 2015. The announcement about the cast and the visual was posted on the anime’s official website.

The story is set on an archipelago of four islands far south of Japan or even the South Seas. It is all but a different world from modern Japan. From the discovery of anti-gravitons came the dream invention of anti-graviton shoes (“grash”) that let people fly the skies. They introduce people to a new realm by enabling flight with just one’s own body strength, without feathers or engines. This led to the rise of the sport of “Flying Circus” (dogfight race).
The protagonist who once hoped for a future in this sport suffered a setback due to an overwhelming defeat, and withdrew from the sport for this and some other reason. However, he met the transfer student Haruka Kurashina, and in teaching her to fly the skies, the old passion returned. He takes part in the Flying Circus again.
Ao no Kanata no Four Rhythm anime series will premiere in winter of 2016 and it will be animated by Gonzo based on sprite/fairys original game. It will be directed by Fumitoshi Oizaki while Reiko Yoshida is in-charge of the series composition.
The anime is based from the adult game Ao no Kanata no Four Rhythm: Beyond the sky, into the firmament, the original PC game featured main scenario writer Nachi Kio, Ryōichi Watanabe and Ryūsuke Mutsu. Served as the game’s art director is Suzumori and co-designed the game characters with Itsuka Yūki. The game soundtrack was scored by Elements Gardenwhile Mami Kawada contributed both the theme song and the “grand ending theme song.” Kotoko contributed an insert song.