You are here: Home / Anime / The Seven Deadly Sins Manga Gets New Anime Series in 2016 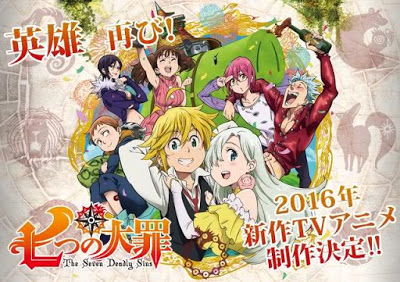 As the anime series The Heroic Legend of Arslan ended last Saturday, an announcement about that production of a new TV anime series for the popular manga The Seven Deadly Sins has been green-lit for 2016.

The returning staff and cast from the first The Seven Deadly Sins anime series are:
STAFF
CAST

When they were accused of trying to overthrow the monarchy, the feared warriors the Seven Deadly Sins were sent into exile. Princess Elizabeth discovers the truth – the Sins were framed by the king’s guard, the Holy Knights – too late to prevent them from assassinating her father and seizing the throne!
Now the princess is on the run, seeking the Sins to help her reclaim the kingdom. But the first Sin she meets, Meliodas, is a little innkeeper with a talking pig. He doesn’t even have a real sword! Have the legends of the Sins’ strength been exaggerated?

[Update as of August 18, 2019]: The Seven Deadly Sins Season 2 Finished at No. 6 in our 2018 Best Anime of the Year. Meanwhile, it is slated to return for its 3rd season on October 2019.
The first anime adaptation of the manga premiered last October in Japan with 24 episodes. In addition, two original video anime projects for the manga have been released last summer.