You are here: Home / Games / Divosaga’s Top Players for August 2015

It’s been a while since the last time I made a ranking list of Divosaga top players. I just have this weird hobby of ranking the players in the game, since every time I got bored playing Divosaga, I always ended up looking at other players’ statistics. My previous list of top players post had been posted on my other blogs, the last time I made a list was the year-end ranking (Divosaga Top Players of 2014) way back in January.
As I looked on top players nowadays, so many things had changed especially in the ranking. There are some who stayed consistent while some already quit the game and new names rising on the list tremendously.
For those, who don’t know yet what is Divosaga, it is a web-browser MMORPG strategic game that is also known as Wartune in the western world, Legend Online in Latin countries and Brazil as well as Demon Slayer is some countries. Divosaga is the Southeast Asian version of Wartune with majority of its players from Malaysia, Indonesia, Thailand, Philippines, Singapore and India.
Lemme’ introduce first who’s in and who’s out among the top players since the game begun in 2012. It was great to see some original players still active today and sad to see some of my favorites quits but it also gives a chance to new players to rank up and enjoy the game.
The game debuted last November 2012 and in the first year of Divosaga, the top players are the phenomenal mage RCart who dominated Divosaga for over a year. Lonewolf is another notable player, he is a ranger and very popular among the original players. Both RCart and Lonewolf quitted already and one of their companions on the same server isMorpheus who dominated the game from 2013 until early of 2015. Morpheus is a very powerful warrior, as far as I know he goes inactive around 4 or 5 months ago since the game does not do any upgrade and it gets boring.
And this August of 2015, we have a new set of Top Players who dominated the game in the past few months; some are consistent players from the early days of Divosaga while some just started in less than a year.

Aussie
The top player in Divosaga and currently the winner of ranger class wars. He holds the title of High Ranger for the past three months already and I think he started playing in the first quarter of 2014. He is one of those players who suddenly rise on the ranking this year.

Austinjet79
A consistent top player and the only player with most number of victory in class wars. He is from the strongest guild in the game which is Outlawz_FC, he’s been in the top list since January of 2014. 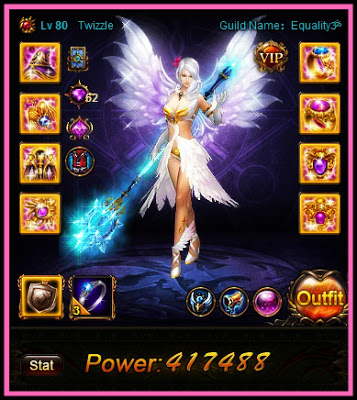 Twizzle
Currently the strongest mage in the game when it comes to battle rating though she had never win in mage class wars yet. I think she had a very solid power and battle protection yet her astrals and passive stats still lack. Though, time will come that she will eventually win mage class wars because she’s a very consistent top player who suddenly ranks up in the past few months together with Aussie.

Ӽαśƙ
The strongest warrior from a new server, he came from a very young server in the game yet a very strong player. He’s been around in the top list in the past few months as well as well-performing players in warrior’s class wars.

HaZeL
She’s been in the top list for quite some time but only reached Top 20 in the past 5 months. She’s a consistent top player in ranger class wars and the guild master of Virtual, one of the strongest guilds in the game.

Morpheus
Now, he goes inactive and had this name RIPDivosaga. He’s been there in the top list for such a long period of time from 2013 until now. He also won warrior’s class wars several times, second only to Austinjet79 when it comes to number of victories. 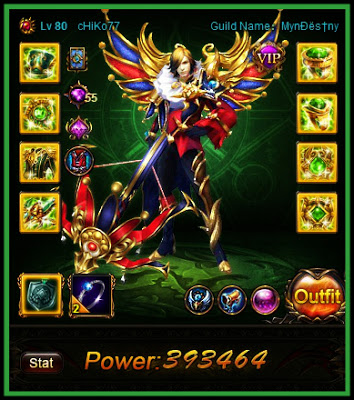 cHiKo77
Well, this guy got so many characters in the game though I believe that this is his main account. He is the guild master of Rockcrew, currently among the top 8 guilds in the game and he won class wars once. 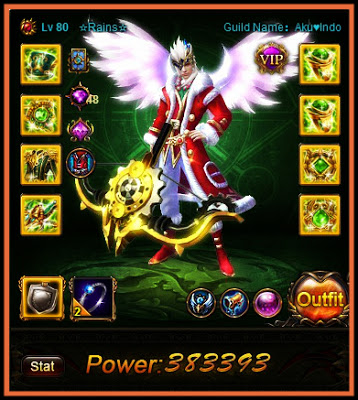 ☆Rains☆
This guy won ranger class wars several times and also on the same level as Morpheus in most of the times when it comes to battle rating and rank in top list. He is from the guild Aku.indu, the second strongest guild in the game and at a certain occasion, became one of the strongest rangers in the game. 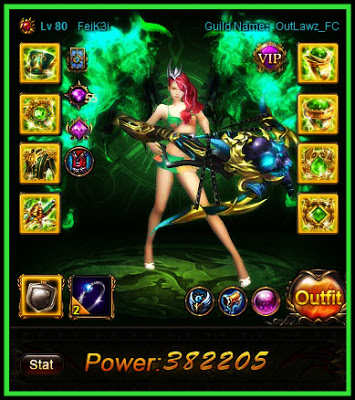 FeiK3i
She’s one of the oldest players in the game; she’s from server 2 – Pisces and currently a member of the guild Outlawz_FC. She’s been a consistent player in the top list and ranger class wars for such a long period of time. I remembered that she’s in the top list way back in the early days of Divosaga.

Yokoshiro
Currently, the High Wizard in the game and one of those players with the most win in mage class wars together with RCart and Felicia. He is also a consistent top player since the last quarter of 2014. 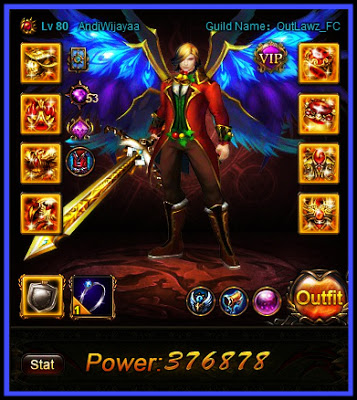 AndiWijayaa
The guild master of Outlawz_FC and also among the oldest players in the game from server 3 – Aries, he’s been a consistent top player since 2014. 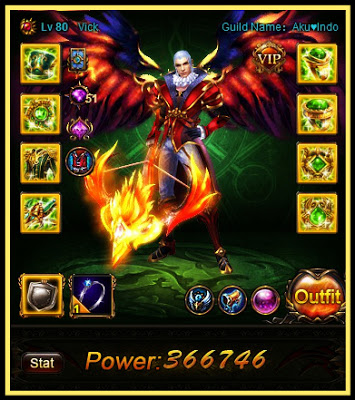 Vick
This guy is one of those players I feared the most when I was still playing Battlefield, but not anymore since I don’t do Flame Tower nowadays. He’s a consistent top player but just enter the Top 20 in the past few months. He’s a powerful ranger and a consistent name on ranger class wars Hall of Warlords. 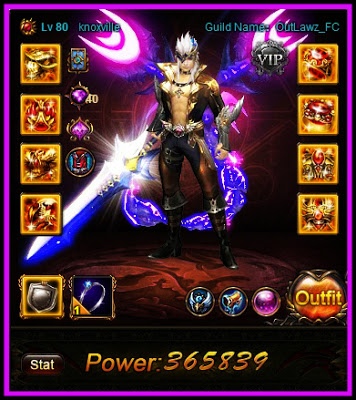 Knoxville
Knoxville is a consistent top player from Divosaga Server 3 – Aries for such a long period of time already. He rose to prominence though just last year and finally won warrior class wars last July 2015.  He’s from Outlawz_FC and usually among the Top 3 in warrior class wars this year.

Demure
Demure is from the guild SHIELD, formerly the strongest guild in the game and one of the oldest. I’d seen this player long time ago, he is among the Top players last year but usually stands from rank 15-20 most of the times. Demure is also a consistent name in ranger class wars. 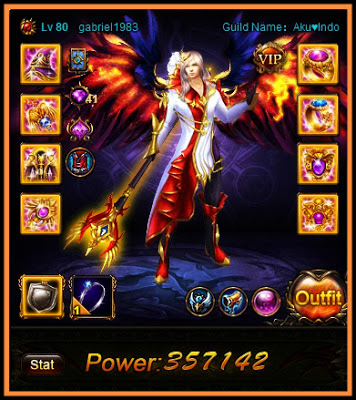 Gabriel1983
This guy is a strong mage who suddenly enter the Top 20 in the past 2 months. I usually saw him in Top 100 overseas ranking and also a familiar name in mage class wars. However, he’s not the aggressive type or just too passive as he was usually absent or AFK during class wars final even he has high battle rating. 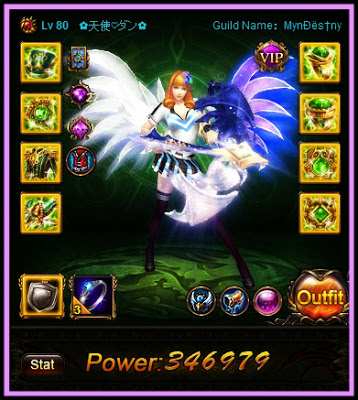 ✿天使♡ダン✿
People call this player Angel, she’s the guild master of MynDestiny – one of the most prominent guild in the game. She had won ranger class wars so many times too, I think she’s second to Raiijin (MrϟQuitted) when it comes to number of class wars victory. As far as I know, she already quits from the game around March or April but still manage to in Top 20.

MrϟQuitted
Formerly known as Raiijin, the most popular ranger in the game I think as he won class wars so many times. What makes him more notorious is that while he is the champion in ranger’s class wars, he also hold the title of the High Wizard since he also owned a strong mage character, Felicia (MrsQuitted) who also won mage class wars four times. He’s from the guild SHIELD, at one point their guild got all the titles in God Revolution: High Warrior (Morpheus), High Ranger (Raiijin) and High Wizard (Felicia). 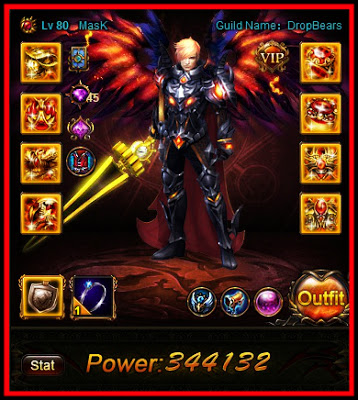 MasK
This guy is one of those players who rose to the top so fast, I’d noticed him around June of 2014 and he’s already a strong level 70-74 player. His original guild is GalaxyWar, I remembered it coz they defeated my guild in the first season of CSG. Currently, he is in DropBears, the same guild as Aussie, a guild that suddenly rose to the top of the power ranking.

LaRan
This player is a very consistent top player in ranger class. She’s from the guild Imperium, used to be one of the strongest guild before they had been reduce in size by the guild Virtual that merged with their server. However, they’re still a pretty decent and strong guild and LaRan has been in the top list for quite some time together with MasK, Aussie, Twizzle and HaZeL. I put these names together since they all came from much younger servers.

Aramis
The only thing I know about this guy is that he usually messed up with people’s guessing on mage class wars final. He is one of those players who kinda lack the power to be in Top 3 of mage class wars but manage to get the 3rd place on several occasions. Well, he really is a strong player both in battle rating as well as in strategy. I think this is the first I’d saw him though in Top 20 list or maybe I just didn’t noticed it in the previous months coz as far as I remember, he usually rank 20-30 most of the time.

OTHER PLAYERS WHO USED TO BE IN TOP 20 SINCE DIVOSAGA LAUNCHED:

Well, that’s my list of DivosagaTop players for August 2015, if you have something to say about this, kindly drop a comment and I’m sure we can talk about it.