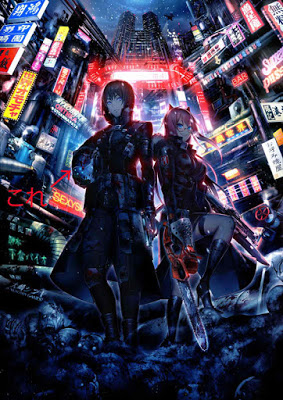 VNDB translate the premise
Nemo ante mortem beatus.
“Nobody can be called happy before his death.”
(Herodotus, “Histories”)
– The era of “Necromancers” has come.
The protagonists, Nagaoka Souun and Kibanohara Ethica, are young “Private Special Living Dead Stalkers“. By practicing a special kind of martial art called “Close Quarter Armed Martial Arts”, both of them have achieved great heights in their career.
Out on a mission one day, Souun becomes involved in a fierce battle and meets a young girl. Remembering nothing but her name, “Hougyou Ilia”, she has become the target of a mysterious group of necromancers.
The ice-cold Tokyo of gunpowder smoke, living dead, crime and cybernetics. Now begins the battle of the living dead stalkers and the heroine with their lives at stake. (Via: Crunchyroll)