The Anthem of the Heart Live Action Film’s Teaser Unveiled 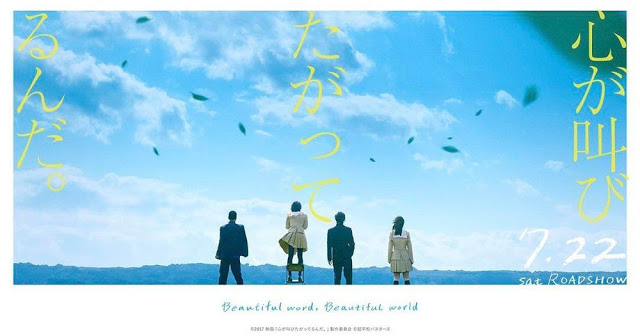 A web teaser for the upcoming live action film for Anthem of the Heart had been streamed by Aniplex on Wednesday – May 24, 2016. The teaser features Jun Naruse, the protagonist in the story of The Anthem of the Heart (Kokosake or Kokoro ga Sakebitagatterun Da.) based on anime film with the same title that hit the theaters way back in 2015.

Anthem of the Heart live action film release date is slated on July 22, 2017.

Anthem of the Heart Story

Jun is a girl whose words have been sealed away. She was once a happy girl, but because of a [certain thing] she said when she was very young, her family was torn apart. One day, the egg fairy appeared in front of her and sealed away her ability to talk in order to stop her from hurting anybody else. Since this traumatic experience, Jun lives in the shadows away from the limelight. But, one day she is nominated to become an executive member of the “community outreach council.” On top of that, Jun is also appointed to play the main lead in their musical…

The film’s cast includes the following:
Directing the film is Naoto Kumazawa who also directed the live action for Kimi ni Todoke, and Kin Kyori Renai

Tags:Live-ActionThe Anthem of the Heart