You are here: Home / Anime / No Game No Life (Zero) Movie Adaptation Announced

One of the biggest anime of 2014 is returning and will entertain its avid viewers on the big screen. No Game No Life anime film has been green-lit and announced during the streamed MF Bunko J Summer School Festival 2016 event on Sunday – July 17, 2016.

The anime was inspired by the fantasy light novel series created by Yuu Kamiya and to celebrate this news, Kamiya drew the following piece of art: 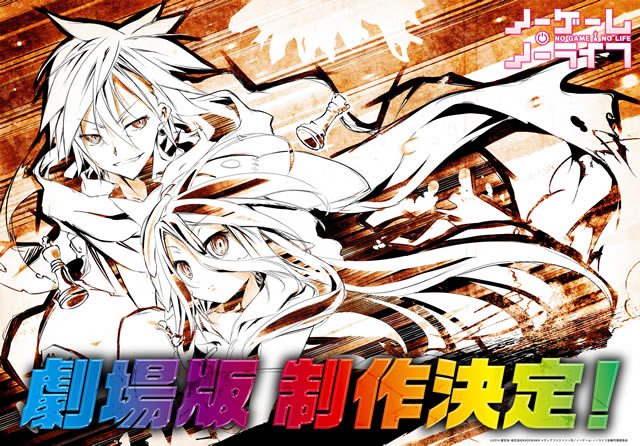 No Game No Life Plot

The story of No Game, No Life centers around Sora and Shiro, a brother and sister whose reputations as brilliant NEET (Not in Education, Employment, or Training) hikikomori (shut-in) gamers have spawned urban legends all over the Internet. These two gamers even consider the real world as just another “crappy game.” One day, they are summoned by a boy named “God” to an alternate world. There, God has prohibited war and declared this to be a world where “everything is decided by games” — even national borders. Humanity has been driven back into one remaining city by the other races. Will Sora and Shiro, the good-for-nothing brother and sister, become the “Saviors of Humanity” on this alternate world? “Well, let’s start playing.”

The fantasy light novel inspired the No Game No Life TV anime which premiered in April 2014.
Via: Anime News Network