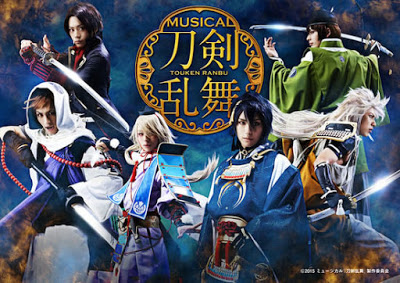 A picture showing the musical cast of DMM’s Tōken Ranbu online browser game has been revealed last Friday. The cast were wearing the costume of their respective roles in the musical.
The main cast is as follows (pictured from left to right):
Ryūji Satō asKiyomitsu Kashū
Daichi Saeki as Iwatooshi
Shunya Ōhira as Imanotsurugi
Mario Kuroba as Munechika Mikazuki
Ryō Kitazono as Kogitsunemaru
Tsubasa Sakiyama as Ishikirimaru
The franchise will also have a stage play adaptation; Marvelous will adapt it into a “straight play,” while it will be adapted too by Nelke Planning into a stage musical.
The musical are being organized by Nelke Planning, DMM.com, Euclid Agency and Nitroplus. The director will be Isamu Kayano who is famous for directed Tokyo Ghoul stage play. The script will be written by Chūji Mikasano while the choreography will be handled by Shinnosuke Motoyama.
The musical will run at the AiiA 2.5 Theater in Tokyo from October 30-November 8. Tickets go on sale on September 19 at 10:00 a.m.
The game is a “sword personification training game” which is takes famous swords from history of Japan and interprets them as bishōnen. The game was launched in Japan this year and it already has users of more than 1 million. The characters design and scenario was created by Nitroplus and the game gained a large female fanbase as well as inspired a wide range of merchandise and several manga.
Anime Central 2022 Cosplay highlight
Anime Central 2022 Cosplay highlight